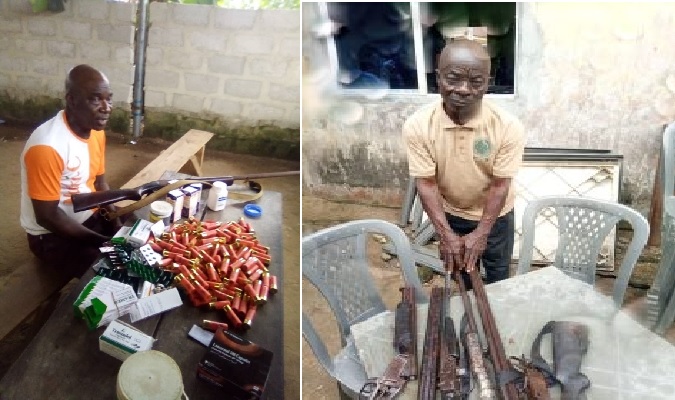 Police operatives in Delta State said 77-year-old and 65-year-old men are in their custody over crimes relating to arms-running, drug-pushing and other criminal infractions.

Police Public Relations Officer (PPRO), DSP Bright Edafe, said in a statement that they were arrested at Isoko parts of the state within the last four days.

He said: “On 20/11/2021 at about 05:00hrs following a distressed call that three suspected armed robbers were in the premises of one man (name withheld) along Ozoro/ Ughelli road;

“The DPO Ozoro Division, CSP Ogedengbe Areguamen, led a combined team of police/vigilante to the scene.

“The suspected armed robbers on sighting the police teams took to their heels and the team gave them a hot chase during which one of the suspects named Emma Ighodalo ‘m’ of Irri village aged 28yrs was arrested with one live cartridge while two members of his gang escaped.

“Upon interrogation, the suspect confessed that he threw his gun away somewhere in the bush as he was running and that he bought the said gun from One Michael Enipozi for the sum of N30,000.

“The suspect led the Police to Irri village where the said Michael Enipozi ‘m’ of Irri in Isoko south LGA aged 77yrs was arrested.

“Three double-barrel guns, two single barrel guns and other tools used in producing guns were recovered from him.

“Preliminary investigation revealed that the 77 years old suspect is a welder who produces guns for criminals and he admitted that he sold the gun to the suspect and that he has been in the business of producing guns for the past twenty years.”

Edafe further disclosed that on November 19, 2021, at about 4:30p.m, operatives attached to the Command in its continued raid of criminal hideouts raided a criminal hideout at Emevor community in Isoko North LGA and arrested one Solomon Udanya, aged 65yrs.

According to him, recovered from him were 130 rounds of live cartridges, one single barrel long gun, three packets of tramadol, six bottles of codeine and various contraband drugs.

He quoted the state’s Commissioner of Police, Ari Muhammed Ali’s assurances to members of the public in the state of his command’s continued commitment to the safety of lives and property, urging them to give useful, credible and timely information for effective policing.

Verdict: The claim is false. The content of the article published by these online platforms is not new; it has been recirculated several times and has been debunked.Police arrest 77-year-old gun manufacturer, 65-year-old with 130 ammunition, drugs in Delta