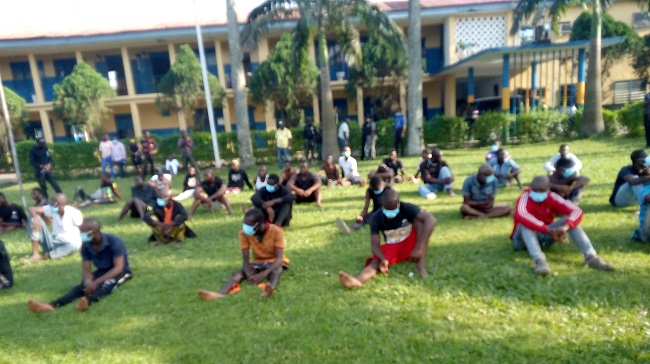 The rising cases of cult-related killings in the Edo State capital of Benin may soon be a thing of the past if the arrest of 16 cultists and 18 runaway inmates from lawful custody during the #EndSARS Prison break at two correctional centres in Benin is anything go by.

Besides, 14 suspected armed robbers were also nabbed by the police in the renewed onslaught against violent criminals while 877 vigilantes who were recently inaugurated by Governor Godwin Obaseki will soon commence training.

Upper Sakponba Road, Third East Circular Road, Ogida, Okhoro and other black spots in Benin metropolis are the scenes of an ongoing blood feud between suspected rival cultists leading to the untimely death of scores of people, mostly youths.

Speaking yesterday at the Edo State Police headquarters during a parade of the suspects and re-arrested inmates, the Commissioner of Police, Mr Johnson Kokomowe that policemen are not folding their arms and watch hoodlums have a field day.

Kokomo said; “Our main concern now, is geared towards re-arresting the escapees and recovering the looted and other illicit arms and ammunition in circulation. To this end, the police and other security agencies in conjunction with the State Government put machinery in place to checkmate the activities of these rampaging hoodlums, which have yielded some positive results.”

The police commissioner noted that 16 suspected cultists from different secret cult confraternities were arrested at different locations within the state for engaging in cult-related activities, murder, vandalism, armed robbery and disturbance of public peace.

Obaseki who joined the Peoples Democratic Party (PDP) in June after he was disqualified by the APC, defeated Pastor Osagie Ize-Iyamu of the APC in the election results announced by the Independent National Electoral Commission (INEC) on Sunday.Police arrest 48 cultists

A Kano based industrialist, Chief Kalu Ogbonnaya, has advised the Federal Government to take necessary steps to stimulate the nation’s economy to prevent a recession post COVID-19.Police arrest 48 cultists

Ogbonnaya who spoke in an interview with the News Agency of Nigeria (NAN) on Thursday in Kano, said as a result of the coronavirus raving the world, no business has been moving.Police arrest 48 cultists

2021 budget will be presented December 3 ― Senate