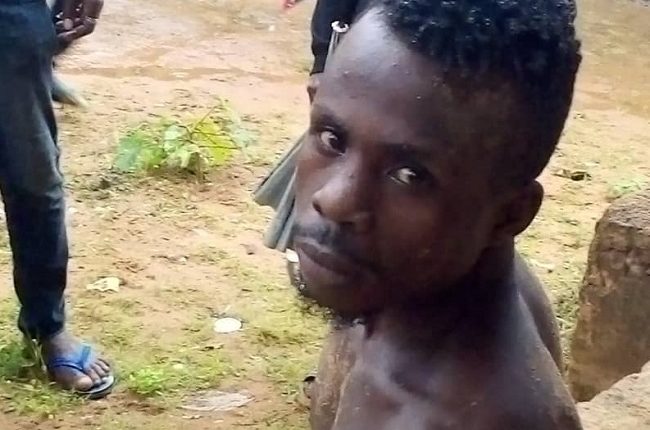 Anambra State police command has arrested a 26-year-old man, Mr Chisom Ogum, for allegedly killing his 70-year-old father with a shovel and buried him in a shallow grave at Umuomaku Community in Orumba South local government area of the state.

In a statement, the Command’s spokesperson, SP Haruna Mohammed, said the suspect was arrested on the 26/9/2020, at about 6:am by Police operatives attached to Umunze Division in collaboration with local vigilante group in the area.

He said the suspect allegedly ran amok in a circumstances yet to be ascertained, attacked and killed his own biological father one Christopher Ogum ‘m’ aged 70years of same address with a shovel and buried him in a shallow grave.

The suspect attempted to escape before he was apprehended and beaten to stupor by an angry mob who equally forced him to exhume the corpse of his father from where he buried it.

Meanwhile, police detectives visited the scene of the crime, photographed the victim and took it to the mortuary for autopsy after it was certified dead by a medical doctor at Umunze general hospital.

Consequently, the offensive weapon used in perpetrating the offence was also recovered as an exhibit and the Commissioner of Police CP John B.Abang, has ordered for the case to be transferred to the State CID Awka for discreet investigation.

A fuel tanker has exploded at Anthony inward Gbagada, Lagos State. This happened as a result of the tanker losing control while on motion and fell sideways thereby leading to an explosion and got two unidentified vehicles burnt…Police arrest 26-year-old man

Hundreds of followers of the Speaker of the House of Representatives, Hon. Femi Gbajabiamila have continued to react to the twitter message on his official twitter handle: @femigbaja, on his engagement with his counterparts from Ethiopia, Ghana, Kenya, Senegal and South Africa on the planned collaboration in the joint task of loosening the stranglehold of foreign debt on our economies, ahead of the 2021 conference of African Speakers, scheduled to hold in Abuja…Police arrest 26-year-old man      Police arrest 26-year-old man

Edo indigenes in diaspora celebrate Obaseki’s re-election, say ‘it is reward for merit’