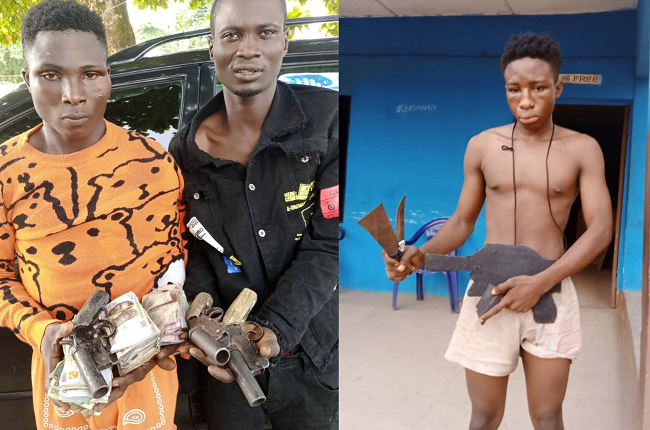 Police operatives attached to Eagle-Net Special Squad, on a routine patrol/stop-and-search duty along Ughelli-Warri expressway have arrested two of a robbery gang with assorted arms and cash.

The police squad arrested the suspects in a navy-blue Toyota Picnic car with Reg. No. AAA 464 YA after it was intercepted.

The all-six male occupants of the car were searched and two of them were found in possession of three locally-made pistols, two handsets, one mobile phone, a power bank and N316, 640.00.

The two suspects, who were arrested on June 14, were Kelvin Godstime, 20, and Samson Ekutu, 23, from Ughellli North and Udu local government areas of the stete.

They were said to be wearing a suspicious look when they approached the police operatives, leading to a search being carried out on them.

Acting Police Public Relations Officer (PPRO), DSP Bright Edafe, confirming the arrest in a statement, on Wednesday, said further investigations were on to fish out other members of the gang.

Meanwhile, a police patrol team from Okpanam Police Division, acting on a distress call on June 13, has arrested an 18-year-old robbery suspect while on operation with a dummy wooden gun, two knives and a torchlight.

The suspect, Emmanuel Peace, was said to have already successfully dispossessed victims of their cash and forced an aged couple to transfer N600, 000 to an account number said to be owned by one Anwanga Abasi Nathaniel Udo before police swooped on him.

DSP Edafe quoted the Commissioner of Police, CP Ari Muhammed Ali, as urging his officers to continue to key into intensive stop-and-search, regular patrols and raiding of black spots across the state.