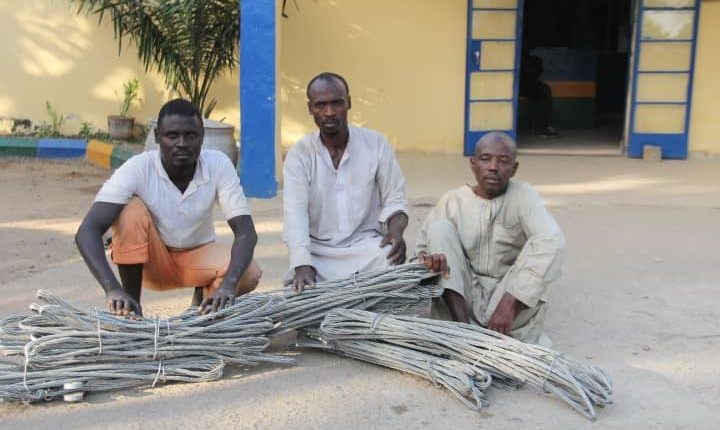 A statement by the PPRO of the Command, DSP Ahmed Wakili contained that the Command arrested a suspect in connection with the gruesome killing of one Hamza Usman while others were arrested for  heinous crime such as; unnatural offence, armed robbery, criminal conspiracy and tempering with electric fittings.

On the 11/11/2020 about 2145 hrs a distress call was received from a Good Samaritan revealing that, one Hamza Usman aged 23yrs of Anguwar Mahaukata Bauchi went to his girlfriend house by name Ramlat Shehu (not real name) aged 15yrs of same address.

The late Hamza was attacked and stabbed on his chest by one Kabiru Ahmed aged 18yrs of Karofi as a result of the bleeding he was rushed to the Hospital for medical examination where a medical doctor certified him dead.

On receipt of the information, a team of policemen were drafted to the scene and the principal suspect, Kabiru Ahmed was arrested, during investigation the suspect confessed to the crime and mentioned two others accomplice Abdul AKA (Walplay) and Waleed AKA (Bandi) now at large.

Effort is on top gear to arrest the remaining fleeing suspects as the  CP, Lawan Tanko Jimeta has directed that the case to be transferred to SCID for discreet investigation.

The release further contained that On 09/11/2020 at about 0940hrs, one Fatima Garba aged 40yrs of Unguwan Shekal came to the Area Command and reported one Shu’ibu Abdullahi aged 55yrs of Anguwan Dawaki Bauchi.

She alleged That some months back, the suspect lured her son, one Sani Umar (not real name) aged 8yrs of Shekal Bauchi, Bauchi L.G.A and forcefully had unlawful sexual inter-course with him through his anus at the multipurpose hall located opposite Wunti market and after that, he gave his sperm to the victim to lick and has been molesting the victim on several occasions.

On receipt of the complaint, a team of policemen were drafted to the scene where both the victim and suspect were taken to the Hospital for medical examination.

During interrogation, the suspect was said to have confessed to have committed the crime and investigation is in progress, after which suspect will be charge to court for prosecution.

On Criminal Conspiracy Armed Robbery and receiving robbed property, On the 08/11/2020 at about 2000hrs information was received from a good Samaritan that, one Bello Abdullahi Ibrahim AKA Dogo a Habitual armed robber aged 23yrs, Sam’ana Idris aged 40yrs and Nuhu Ahmadu aged 76yrs criminally conspired among themselves, armed with cutlasses, stick and touch lamp blocked Katsinawa road Polchi villages bush route, where they attacked one Idris Shua’ibu of Katsinawa village in Tafawa Balewa L.G.A, Bauchi State and robbed him of his Jincheng  AX 100 motorcycle valued N 80,000 and a bag of raw unprocessed rice valued at  N14,000.

Similarly on the 09/11/2020 at about 2000hrs the 1st suspect, Bello Abdullahi Ibrahim AKA (Dogo) criminally conspired with one Musa and Mohammadu both of the same address surnames unknown now at large, went to the same road with intent to commit armed robbery, in the process they encountered a join team of Police and vigilante group attached to Katsinawa police out-station and arrested Bello Abdullahi Ibrahim AKA Dogo a Habitual armed robber aged 23yrs whom escaped in covid-19 isolation center during lockdown with the same offence.

While Musa and Mohammadu others escaped to unknown destination. Effort has been intensified to arrest the fleeing suspects with Investigation is on-going. After which suspects will be charged to court for prosecution.

Exhibits recovered from them include;

When interrogated, the suspects confessed to the crime and added that since May 2020 they have been vandalizing the electric cables in Bulawudo and Kesa villages in Gamawa L.G.A Bauchi State for about five times.

Exhibits recovered from them include;

One motor –vehicle Golf as Investigation is on-going, after which the suspects will be charged to court for prosecution.

Also on 07/11/2020 at about 2030hrs one Ibrahim Janar  of Yelwan Gikar Gigyera ward Alkaleri L.G.A came to the Police Station and reported that, on the same date at about 1930hrs while on his way to Yelwan Gikar from burga village in between Yelwan Gikar and Mundamiyo villages he was attacked and robbed of his boxer motorcycle with reg. no. NSW 301 QL.

On receipt of the report, a team of detectives moved to the scene, the hoodlums were chased which led to the eventual arrest of one Abubakar Jibrin  aged 30yrs and Sama’ila Salisu aged 30yrs both of the same address in connection of the act.

Effort is on top gear to arrest the remaining suspects at large while Exhibits recovered from the suspects are One Boxer motorcycle, One locally made revolver gun, Investigation is on-going, after which suspects will be charged to court for prosecution.

The Commissioner of Police, CP Lawan Tanko Jimeta, directed all the suspects to be profile and charged to court and assured law abiding citizens of the state of the Force’s renewed and unwavering commitment to their safety and security, especially as we approach the yuletide period, he called for the collaboration and support  of the citizens as the command will not hesitate to mobilized all resources within to confront and neutralized criminal act and tendencies.

We’re here to build with you, Nigerian-Americans assure Biden