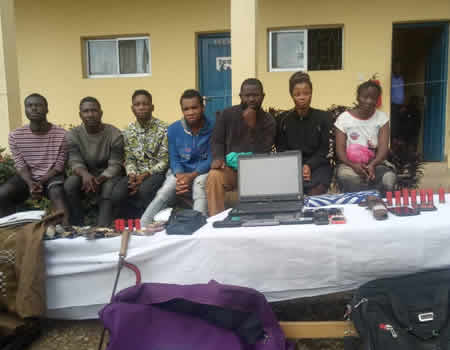 Share
Authorities of Osun State Police Command on Wednesday paraded 10 suspected armed robbers, some of who specialised in stealing exotic cars.
The list of the paraded suspects includes Oyewunmi Oyelakin, Adebayo Yemi,  Adeyeye Opeyemi,  Olawale Munirudeen, Sunday Ogbemudia, Lasisi Isiaka, Samuel Johnson and Isiaka Fatai.
The 10 robbery suspects paraded included a four-man robbery gang led by a 24-year-old Lakin  Oyewunmi that specialised in stealing cars.
Addressing journalists while parading the suspected armed robbers, the Commissioner of Police in Osun State, Mrs Abiodun Ige said the Special Anti Robbery Squad of her command was able to apprehend the suspects through the reports lodge by their victims.
According to her, “we have apprehended some suspected armed robbers who have been terrorising Osun for quite a long time.  We were able to trace their activities from 2018 and we were able to arrest all of them.”
“Recovered from the suspects are 5 vehicles, mobile phones, laptops wrist watches snatched from different locations, and arms and ammunition. They stole all the items a man was preparing to use for his coronation. They went to peoples’ houses snatched their vehicles, pack their belongings including phones,  clothes, laptop among others.”

“They were arrested one after the other. Some of them have been charged to court while these ones have been helping us get the others for about a month, two months. They will also be charged to court after we have concluded our investigations.”
“We also arrested Lasisi Isiaka, another suspect who specialises in snatching of motorcycles from victims with dangerous weapon and Samuel Johnson and Isiaka Fatai who received the stolen motorcycles. Five motorcycles were found in Samuel’s possession. Three were recovered from Fatai. In total, we recovered eight motorcycles from them”, Ige remarked.
She, however, maintained that the Police would not relent till the state is crime-free, stressing that every effort and strategic measures would be put in place to ensure the prompt arrest of criminals.
One of the robbery suspects who led the four-man gang,  Oyewunmi Lakin in a chat with journalists confessed to the crime, saying he was lured into the crime after being held in prison in place of his friend.
He said,  “I formed the group in November 2018. We were arrested after our eighth operations.  We normally sell off the valuables we stole. We specialise in stealing Toyota Corolla cars and we sell at the rate of N500,000.”
“I bought a gun we use for our operations and sometimes we also target where the vigilantes keep their guns and go at their back to steal them. I was lured into to this after a friend staying with me robbed a boutique  and absconded.”
“I was arrested in his place and taken to Ile-Ife prison. That was where I met a dealer who introduced me to stealing cars. He also promised to fly me out of the country. He has run away”, Oyewumi asserted.