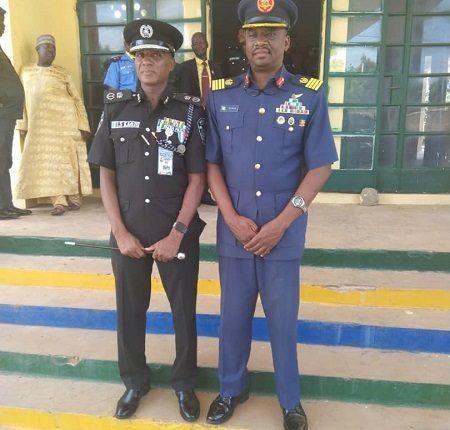 Share
The Nigeria Police Force, Sokoto State Command is set to partners its sister agency, Nigerian Air Force in other to curtail criminal activities in the State.
The state Commissioner for Police, CP Ibrahim Sani Ka’oje, stated this in a statement signed by the Police Public Relations Officer ( PPRO), ASP Muhammad Sadiq, and released to journalists in the state on Wednesday shortly after the commissioner host the Commander 119, Composite group of Nigeria Air Force.
He said, “in recognition of the continued need for close partnership and smooth working synergy among sister security agencies, in order to address the existing security challenges in the State. The State Commissioner of Police, Ibrahim Sani Ka’oje psc, has today received the Commander 119 Composite Group of the Nigerian Air Force, who paid him a courtesy visit in his office at the State Police Headquarters.

“There was a meeting which was robust and all encompassing had series of critical security issues addressed.”
“While stating the objective of the visit, the Commander expressed his satisfaction and sincere belief in partnership and harmonious working relationship as envisioned by the State Police Command, and equally solicit the support of The Nigeria Police in tackling the daunting security challenges in the State.”
The statement further said the Commissioner of Police, thanked the Commander for the visit and expressed his readiness and commitment to partner with all security agencies towards effectively securing the State of Sokoto.
“He equally assured the Commander of all necessary support from the Command in order to secure the state airport, passengers and facilities from any form of unwanted eventualities”.
The CP, however, urged all Officers to remain professional and loyal to their duties and Superiors. He also commends the insightfulness of the Commander towards tackling security challenges in the state.