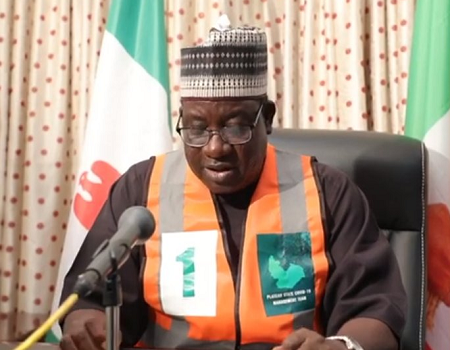 The Plateau Government, on Sunday, announced the first death resulting from COVID-19 in the state.

Simon Lalong made the announcement during a media briefing on the update of COVID-19 in Plateau at Government House, Jos.

Lalong explained that the patient died before his result of COVID-19 which read positive came out.

“As at today, we have successfully treated and discharged 10 infected persons including the index case who have all been reunited with their families.

“The other 22 infected persons are still undergoing treatment and in stable condition. Sadly, one suspect whose sample was taken died yesterday before his result was returned positive,” he said.

He said the state had recorded more cases of COVID-19 that rose to 33, which had necessitated redoubling of efforts to checkmate community spread, by conducting contact tracing, isolating suspected contacts and treating the infected patients.

The governor said breaches at the interstate border was the major challenge the state was facing in its efforts to control the spread of the disease but was engaging community members to block illegal routes.

“This has exposed the state to more dangers of COVID-19, as virtually all the cases we have recorded, originated from other states and were imported by people who defied our directives and entered the State at all costs. This is indeed sad,” he said.

He said to ensure better enforcement and compliance, the state government would enrol some of its civil servants on grade levels 10 to 14 for the exercise, while such action would also be replicated at the Local Government Areas.

Lalong said that the government had to review some of its guidelines on its lockdown due to concerns of residents’ hardship to access financial institutions.

“With effect from May 17, 2020, the total lockdown will resume from midnight of every Sunday and be relaxed on Wednesdays 12 midnight.

“This will henceforth be the pattern until further review. In other words, the total lockdown is relaxed on Thursdays, Fridays, Saturdays, and Sundays; while Mondays, Tuesdays, and Wednesdays remain totally locked down,” he said.

He noted the Faringada Market in Jos North Local Government Area had continued to defy all guidelines for social distancing and sanitation and posed potent threat to efforts to combat COVID-19, thus the market had been shut down.

The governor said the market would remain closed until the trade unions and the management of Jos North Local Government come up with an acceptable model for regulation that posed no risk to public health and safety.

Lalong said the state had so far evacuated 601 Almajirai (Qur’anic education) pupils to their home states and had received 119 in the state, saying that only one of the returnees tested positive to COVID-19.

He said the decision for the evacuation of the pupils was a collective decision taken by 19 Northern governors to guarantee the safety of the children exposed to many dangers, including COVID-19.

The governor thanked the various individuals and corporate organisations who contributed to the Plateau COVID-19 Trust Fund, saying it had received almost N100 million in donations which would be deployed transparently.

The governor condoled with the family of Rinji Bala, a 20- year-old University of Jos student, who was shot along Zaria Road on May 12, 2020, saying he had already ordered a probe while urging for calm for legal action.

He also sympathised with victims of attacks in some communities, especially in Bassa Local Government and the family of Dr Nandi Drenkat, a Senior Lecturer at the University of Jos, who was murdered and his daughter kidnapped.

“I am glad to report that following the quick response of security agencies in conjunction with the Hunters Association, the kidnapped daughter of the lecturer was rescued alive.

“Sadly, one of the gallant members of the Hunters Association, Muhammadu Sani, made the supreme sacrifice as he died of gunshot wounds from the criminals,” he said.

Lalong said the state government was working with security agencies to arrest perpetrators of the criminals and ensure they were punished.

“Already, security forces have arrested a suspected mastermind of kidnappings around the Eto-Baba, Bauchi Road general area, who is currently undergoing interrogation,” he said.