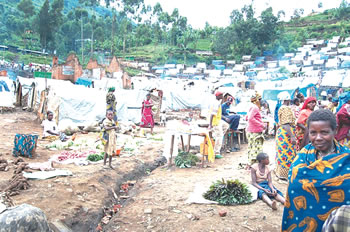 Internally Displaced Persons (IDPs) in Plateau have appealed to the Federal Government and international Community render assistance to them just like their counterparts in the North-East.

News Agency of Nigeria (NAN) reports that most of the Camp coordinators, who spoke in the various camps visited, made the same request.

“Sir, could you believe that in this very camp, where we have over 2000 IDPs as a result of the attacks on Gashish District last year, since November last year no single government official or organisation visited us to assist us.

“We have teeming children and women, most of who are widows and orphans, yet nobody cares to come around to feel what we are feeling till this your (Chairman’s) visit to us today.

“The visitor and assistance we got were Christian Organization since November last year, yet each time we hear on Television and Radio, billions of Naira being pumped to our counterparts in the North-East.

Philip told the Chairman that what they wanted was for them to return to their respective communities if only Government, Corporate bodies and wealthy individuals and Philanthropists could assist them to “rebuild our destroyed houses and provide adequate security for us.”

NAN reports that the speech of Philip brought tears to many people on the Chairman’s entourage, including him (Mondyau).

Responding, Mondyau told the IDPs that it was out of Government’s concern that he embarked on the two days meeting to the IDPs tour and assured them of Government’ readiness to assist them to return to their respective communities.

Mondyau pledged to relate their plights and pleas to both the state and federal government for necessary assistance, but also assured them of his “widow’s might” at alleviating their plights.

He said part of Governor Simon Lalong plans is to ensure that all the IDPs in the 12 camps returned to their respective communities before the new year.