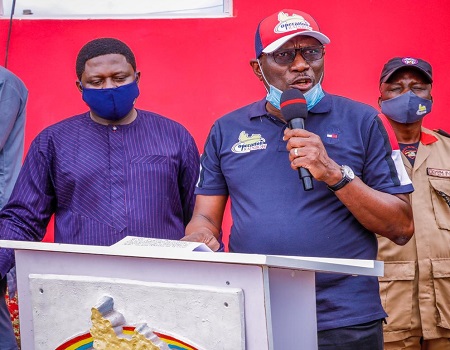 As part of the efforts to tame insecurity in some parts of Plateau State, the State Government has established security outpost and surveillance tower in the troubled Jos North local government area to prevent and minimise crime and other antisocial vices.

Speaking after Commissioning the tower at Dutse Uku, in Jos North Local Government, Governor Simon Lalong said the initiative was another step in the consolidation of the peace and security anchored on proactivity and a community engagement approach in crime detection and prevention.

“This Security Outpost and Surveillance Tower are designed to detect, prevent and minimize crime within the Dutse Uku, Jos Jarawa and the Jos general area by providing a grassroots-based intelligence gathering system to assist security agencies in responding effectively to distress calls within the Jos Metropolis.

He pointed out that the project has nine offices; a dialogue and conference hall; Information Technology Infrastructure with CCTV Platform; Dome Camera with a 1.5-kilometre range that gives day and night visuals of one thousand five hundred metre perimeter and a solar-powered inverter that can provide power for about 12 hours a day.

The governor also added that it also has an Armoured Personnel Carrier and 2 patrol vehicles equipped with security gadgets for the purpose of rapid response and actionable engagement in crime prevention.

Governor Lalong stated that the project should be seen from the wider context of reinvigorating the Operation Rainbow and setting the tone for the implementation of Community Policing in the state.

“In recent times, we have seen the attempts by some criminals to instil fear among the people through kidnappings, robberies, cultism, rape and banditry. With this Security Outpost and Surveillance Tower, we will be able to not only identify them within the communities but also move against them before they commit crimes” he said.

In his address, the Permanent Secretary Cabinet Services Mr Cornelius Shiolbial said the surveillance centre has provision for dialogue and dispute resolution where crises can be tamed before they occurred.

Shiolbial further disclosed that Operation Rainbow personnel will be on duty 24 hours running shifts where they will be expected to respond to threats and intelligence reports.

EDITORIAL: Defence Minister’s Lamentation
THE Minister of Defence, Bashir Magashi, has lamented that Nigeria’s military is too understaffed and underfunded to tackle the various security challenges facing the country. He made this lamentation while briefing journalists after a Federal Executive Council (FEC) meeting where he said he had made a presentation on… Plateau Plateau Plateau Plateau Read full story

Rule of law should not be optional — Belgore SAN