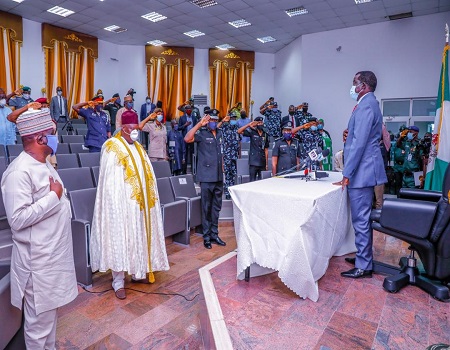 As part of the process to begin the implementation of community policing in Plateau State with the aim of tackling crime through a bottom-top approach, Governor Simon Lalong has inaugurated the State Community Policing Advisory Committee.

The governor after inaugurating the Committee at the Government House on Friday said Plateau State has longed for the implementation of the Community Policing initiative in order to fight crime and criminality.

Governor Lalong said the state has since realized that the best way to guarantee the security of people was by embracing a bottom-up approach which emphasizes early warning, intelligence gathering and crime prevention.

He said, “ With a grassroots and people-driven approach such as Community Policing, we are more likely to identify and fish out criminals, thereby saving the citizens from the agony associated with loss of lives and properties”.

He charged the Committee which is the highest custodian of Community Policing in the State to be focused and resolute in carrying out the assignment by shunning every distraction that could arise from religious, ethnic or political pressures.

ALSO READ: I did not engage personal agent to recover FG’s assets ― Malami

Lalong said the Government and people of Plateau State will also be looking up to the Committee to act in the best interest of peace and security of all.

In his address, the Deputy Inspector General of Police, Lawal Shehu said the concept of Community Policing is to ensure that the people are involved in security affairs with more emphasis on intelligence and information gathering.

He said the special constables to be recruited will be people of good standing in society who are gainfully engaged with a good record within the community.

DIG Shehu said they are not to take over from the police, but to collaborate with the police under their supervision and as such will be thoroughly screened to ensure that criminals are not involved.

Co-Chairman of the Committee, Gbong Gwom Jos, Da Jacob Gyang Buba assured that they will be focused and resolute in carrying out their assignment by shunning every distraction that could arise from religious, ethnic or political pressures.

He commended President Muhammadu Buhari and the Inspector General of Police for their commitment to ensuring that policing is enhanced in line with the Federal system and constitutional provision that Governors are Chief Security Officers of their States.

Members of the Plateau State Community Policing Advisory Committee are drawn from a wide spectrum of society.

COVID-19: Reps member calls on FG to include constituents in relief package