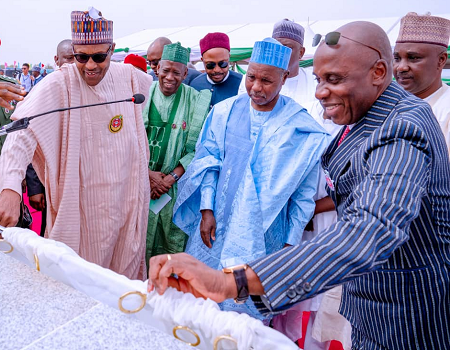 Speaking, on Monday, at the ground-breaking ceremony in his hometown, President Buhari noted that the transport sector was in dire need of new thinking, skills and investment, assuring that the university will open up opportunities for economic growth.

A statement issued by Garba Shehu, Senior Special Assistant to the President (Media & Publicity) quoted him as saying: “The project is part of the ongoing effort of the Federal Government towards promotion and development of indigenous capacity through technology acquisition and knowledge transfer to effectively maintain and operate numerous railway infrastructure.”

ALSO READ: I have no regret siting Transport University in Daura ― Amaechi

The President said the policy on the development of indigenous capacity will be vigorously pursued by the government.

He added: “When established the university would among other things pave way for domestication of railway engineering and general transportation sciences in Nigeria thereby bridging the technology and skill gap in the railway and ultimately transportation sector.”

President Buhari said the university, which is an investment by China Civil Engineering Construction Company (CCECC), will be fully supported by the Federal Government with guidelines to ensure domestication that will support local infrastructure.

While commending the Katsina State government for speedily providing land for the university, and the Ministry of Transportation for the initiative, the President said his administration will continue to prioritize railway transportation that will reduce cost of transportation and ease movement.

In his remarks, Governor Aminu Bello Masari of Katsina State said the university will further boost the efforts of the state in providing sound education and technical skills to indigenes of the state.

The governor said the infrastructure of the state had been improved with the construction of many roads, adding that the university will provide requisite technical and managerial skills.

The Minister of Transportation, Rotimi Amaechi, said the siting the university in Daura will encourage cultural exchange as well as fill the gap in technical and managerial skills for the transport sector.

“The decision to bring this university to Daura was purely mine,’’ he added.

Buhari applauds Amaechi, CCECC as he flags off University of Transportation in Daura