Physician appeals to Nigerians to donate blood voluntarily to save lives 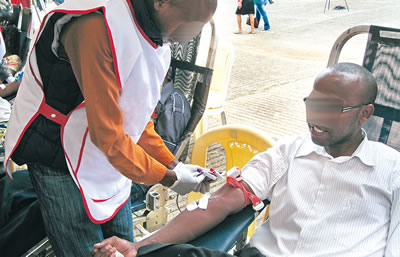 A physician, Dr Soji Adeleke, on Wednesday in Lagos called on Nigerians to donate blood voluntarily in order to save the lives of fellow citizens who might need it during medical treatments.

Soji, a gynaecologist, and the Cheif Medical Director, Tonasij Hospital and Maternity, Ikotun, Lagos, made the appeal while lamenting on the death of Mrs Ngozi Amaechi, a patient of the hospital who died during childbirth.

The medical practitioner told the News Agency of Nigeria (NAN) that the deceased died alongside the baby after a cesarian operation that caused much loss of blood.

“We had to embark on the operation based on 50-50 chance after the husband could not make available money to purchase blood at N25,000 per pint.

“My decision to go ahead with the operation was based on the belief that the deceased had undergone blood building process with the hospital since February she registered for antenatal,” he said.

The doctor who regretted the death of Mrs Amaechi called on Nigerians to cultivate the tradition of donating blood to blood banks to make it easy for people to access blood when needed.

He said that such sad situation was common in society and needed to be curtailed on a holistic basis.