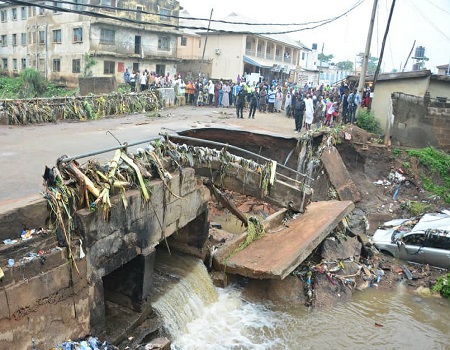 No fewer than four people were swept away by the heavy downpour owing to the collapse of Oke-Erin bridge in the Ilorin metropolis at about 10 pm on Saturday.

A message by the state fire service in its official Facebook page on said that “The Kwara state fire service was summoned to a rescue operation at Oko Erin Area last night at about 22:30 hours involving a vehicle with five people inside the car while the bridge has been submerged by the torrent flowing over the bridge due to the downpour.

“The brigade has been working round the clock to recover the victims. However, Mr Okechukwu Orwabor has been found at Coca Cola area road”, the state fire brigade said.

The Nigerian Tribune gathered that Chuben Orwabo and Chibike Orwabo, both family members of the deceased, who were also swept away by the downpour, are yet to be seen either dead or alive as at the time of filing this report.

It was gathered that the heavy rains, which started few minutes past 10 pm destroyed the setback of the Oko Erin bridge, making it partially impassable.

Scores of security personnel and traffic controllers were on hand yesterday controlling human and vehicular movement in and out of the area.

The state government had attributed the collapse of the bridge to illegal construction on setbacks and waterways.

Speaking on the development, the Chief Press secretary to Governor Abdulrahman Abdulrazaq, Rafiu Ajakaye, who was also at the scene, said drastic measures would soon be taken to curtail indiscriminate dumping of refuse in canals and drainages.

He promised that the government would urgently affect the repair of the collapsed setback of the bridge.

The media aide also warned residents of the state to desist from constructing on the waterways.

“As you can see the commissioner of Works had visited the affected bridge. The proper assessment would be done and the decision would be taken. The collapse of the setback not the bridge in itself was caused by people’s encroachment. The government will take necessary steps to forestall this happening again”, he said.