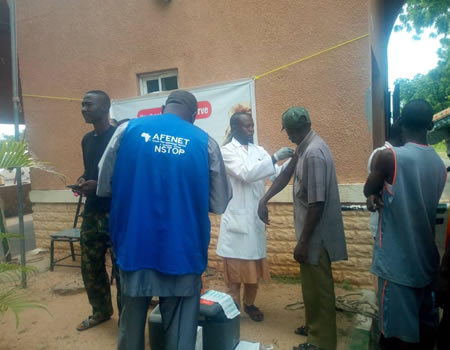 Preliminary investigations by Bauchi Health Ministry has confirmed a suspected outbreak of yellow fever around  Yankari Games Reserve and Safari which has led to the death of four students of College of Education, Waka-Biu in Borno State who went there on an excursion recently.

While speaking on the situation during  a press conference on Thursday, the Executive Secretary, Bauchi State Primary Healthcare Development Agency, (BSPHCDA) Dr. Rilwan Mohammed, said that the Ministry of Health in the State received a report of a confirmed yellow fever case from the Kano State Ministry of Health which was linked to Yankari Game Reserve.

He added that the Ministry also received reports from Gombe and Borno States of suspected cases which were linked to the Reserve saying that following these reports, the State Rapid Response Team comprising of all relevant stakeholders visited the Yankari Games Reserve on Wednesday, September 4, 2019, to investigate the incidence.

He said that “the Team discovered that there was a possibility of a yellow fever outbreak which is being investigated. So far, six samples have been collected from suspected cases for testing in the National Reference Laboratory in Abuja and at the Regional Laboratory in Dakar – Senegal.”

Rilwanu Mohammed who said that the main confirmation will come from Dakar – Senegal added that: “Additional investigations and other control measures are being put in place by the state with the support of agencies and relevant partners in the state and the Nigeria Center for Disease Control in ongoing.”

The Executive Secretary also  said that the samples of the students who came for holidays at the Yankari Games Reserve have been taken “and some of them were also reactive but we are still not confirming the case (of yellow fever) until the Dakar case is actually confirmed but I can beat my chest and say that we are having the case but as for now, it is a suspected and reactive outbreak of yellow fever in Bauchi state.”

He further said that over 600 people in Yankari and around there were vaccinated adding that vaccinations will also be carried out in all the 20 LGAs in the state so as to prevent it from spreading.

The Executive Secretary said that “But as we are doing that, we also have to carry out environmental management since it is an environmental disease. BACATMA (Bauchi Agency for the Control of Tuberculosis, Malaria and Aids) sprayed all the Chalets in Yankari and also the environment.”

He disclosed that there were three suspected cases of Lassa fever in the state which have also been sent to the Regional Laboratory in Dakar -Senegal stressing that the confirmation will still come from there.

He called on the general public not to panic as the government is doing everything possible to safeguard the health of the people.

It will be recalled that four students of the College of Education, Waka-Biu in Biu Local Government Area of Borno State were confirmed dead while 12 hospitalized after a field trip to Yankari Game Reserve in Bauchi.

According to the report, those who lost their lives complained of abdominal pains after which they vomited blood.

Meanwhile, vaccination against yellow fever has commenced at the NYSC Permanent Orientation Camp,  Wailo in Ganjuwa LGA of the state where Corps members are currently undergoing the three weeks camp.

Our Correspondent gathered that the vaccination exercise which is being done by officials of the State Ministry of Health in conjunction with the NYSC management is to avoid any outbreak in the camp.