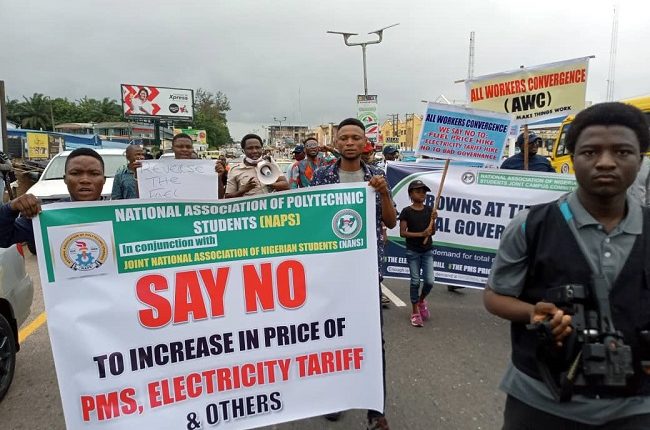 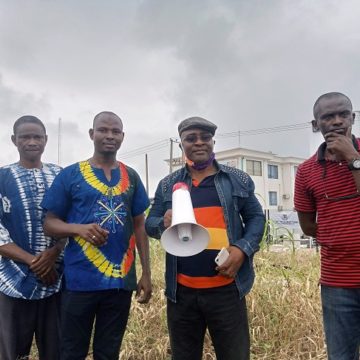 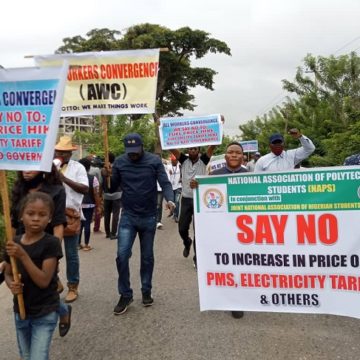 The protesters decried the spiral effect of the hikes in increased cost of commodities and high cost of living, asking the Federal Government to revert to statusquo or face a nationwide protest that will shut down the nation’s economy, in the next seven days.

In his address, National President, National Association of Polytechnic Students (NAPS), Mr Olalere Adetunji, it was inconceivable that the price of fuel and electricity tariff was increased just at about the same time that President Muhammadu Buhari said he was concerned about increment in the prices of food stuffs.

Rather than removing fuel subsidy, Adetunji tasked the Federal Government to cut down on the cost of governance, the salaries and allowances of political appointees to have money to run the nation’s economy.

He noted that the masses will mostly bear the brunt of the increases in fuel price, electricity tariff and DSTV price, especially as they still grappled with hard times occasioned by COVID-19. 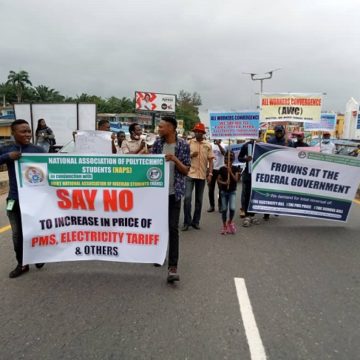 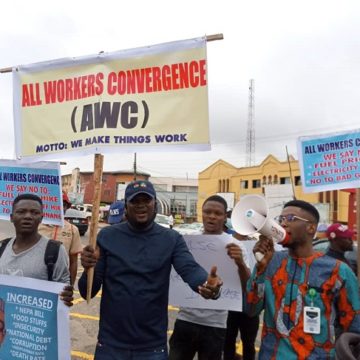 “We are doing this genuinely to stampede the wicked act and policy makers because they are not being considerate.

“It is only in Nigeria that the law of Isaac Newton does not work. Whatever goes up always goes up. During COVID-19, transport fares, food prices increased and will never come down. There is always a ripple effect of hike on the price of fuel on other commodities. The masses are suffering.

“I do not see President Buhari as a wicked father. We say no to fuel price hike and all other increments like electricity, DSTV. We are giving the federal government a seven days ultimatum that if they it refuses to revert the fuel price to statusquo, we will move massively nationwide to protest and stampede the economy of the nation,” Adetunji said.

He noted that the woes of several students with small scale businesses will be worsened by the increase in fuel price and electricity tariff.

He stressed that a seven days ultimatum had been given to the federal government to return to statusquo, or the nation’s economy will be shut down.

“The agitation is about bad governance in Nigeria. Increment in fuel price, electricity tariff at this time does not augur well with us. We have several students with small scale business that they fund themselves. Electric supply is epileptic yet it is increased.

“They also use fuel when electricity fails and this has also been increased. Government should look for an appropriate time to remove the subsidy. We have given seven days ultimatum to do a reversal or we will shut down the Nigerian economy,” Opakunle said.

In another protest, a group of four Nigerians led by a legal practitioner, Yomi Ogunlola said the Federal Government erred in removing fuel subsidy without requisite social security to cushion the attendant effects of the removal on Nigerians.

Ogunlola, a legal practitioner, decried that increment in pump price of fuel and electricity tariff was ill-timed as it further strained the lives of already stressed Nigerians.

Compared to the protests that greeted similar fuel hike during the tenure of former President Goodluck Jonathan, Ogunlola said it was baffling that Nigerians were drawback about taking to the streets in protest against the hikes.

“We are not happy with the timing of the deregulation especially when government has made no provision whatsoever to ameliorate the pains of the people.

“I have been an advocate of removal of subsidy but we are saying that government should have cushioned the effect of the removal on the lives of the people.

“All over the world, deregulating the oil sector is the trajectory all over the world. In Nigeria, our case is peculiar here because there is nothing like social security.

“Transportation is in a mess; power is in a mess; there is homelessness and joblessness. So, why the removal? COVID-19 appeared in March; Nigerians have been at home not earning an income, yet you remove fuel subsidy.

“The new policies of government and their programmes are anti-people and inhuman.

“Also, we not happy with the increment in electricity tariff especially when we are not getting quality service from the respective DISCOs,” Ogunlola said.