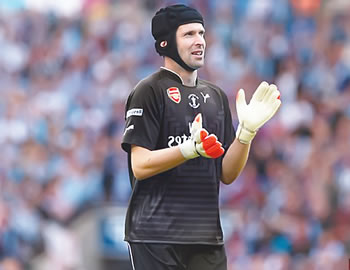 Petr Cech is retiring from international football after playing 14 years for Czech Republic, saying it will help prolong his club career by giving him more rest during the season.

The Arsenal goalkeeper played his final major tournament for the Czech national team at Euro 2016 in France, when the team was eliminated in the group stage.

He had hinted before the tournament that he could quit internationals after this summer, and confirmed that decision on Friday.

“I think I’ve reached the point where I believe that if I want to continue doing things to 100 percent every day, like I’ve always done, then I will probably need more time to rest and recover,” Cech told the Arsenal website. “This is a purely football-based decision. If I want to prolong my career and play at the highest level for as long as I can, then I will probably need to find the balance so that I can continue to do so.”

He added in a message to his teammates on Twitter: “We lived some amazing moments together – wishing the team all the best for the future.”

Cech had said he wanted to make his decision well before the start of World Cup qualifying to give the team time to plan for the future.

“I’m now 34 and the next [international] tournament is in two years which, in football, is a very long time,” he said. “The last thing I wanted to do was start a campaign and then say ‘I don’t think it’s right for me to continue’ halfway through it.”

Cech made his international debut in 2002 and has earned a record 124 caps since then, playing at five major tournaments including Euro 2004 where Czech Republic reached the semifinals before losing to eventual winners Greece.

“I’ve made fantastic memories and I will keep them. But as I said, you cannot stop time and sometimes you need to make decisions looking to the future. I believe it is the right move,” he said. “When I was a kid, my ultimate dream was to play for the national team at least once. Having done it so many times makes me really proud.

“You look back at the Czech and Czechoslovakian history and you see so many great names and players. I managed to play more games than them, which shows the consistency and quality of my game.”

C. Ronaldo is better than Messi, but I am the greatest of all, says Brazilian legend,…