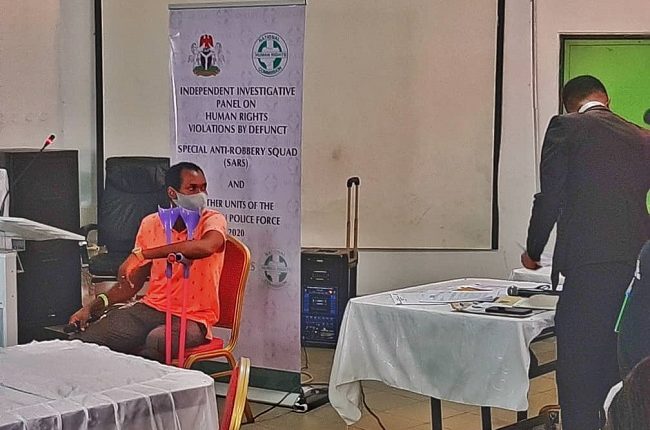 A petitioner, on Wednesday, narrated to the National Human Rights Commission (NHRC) independent investigative panel on defunct SARS and other police units how recklessness of some police officers led to the amputation of his leg only six weeks after his wedding.

The petitioner, Kingsley Ezera Kalu, had filed a petition, marked 2020 IIP-SARS/ABJ/92, alleging threat to life and unlawful shooting against Akpabio Daniel with Force number 477199; the Federal Capital Territory (FCT) Commissioner of Police and the Inspector-General of Police.

Kalu informed that he in the company of his newly wedded wife, Chidinma and brother-in-law went to the Exclusive Stores at Wuse II in Abuja on October 18, 2017, adding that while there they heard some noise from outside and on checking, they saw policemen having an altercation, leading to gunshots.

According to him, on the advice of his in-law, they made to leave the place for safety.

“On our way exiting the building, the gun bullet hit me on the left leg. My brother-in-law took me to MaitamaGeneral Hospital,” he told the panel.

He said that on the following day, due to the severity of the gunshot injury on him, he was referred to the National Hospital, Abuja, where he was told after an initial operation that the gunshot wound was so bad and infected, adding that the oy option to save his life was to have the leg amputated.

He said that the left leg was eventually amputated from above the knee at the hospital, adding that his family made several efforts to reach out to the police at the Maitama station.

He informed that while still at Maitama General Hospital, the Divisional Police Officer (DPO) of Maitama Police Station visited and interrogated him there, adding that the DPO gave him the sum of N150,000.

Kalu, therefore, sought a public admission of the negligent acts of the police and their agent and apology in at least two national dailies for two weeks.

The petitioner further sought prosecution and sanction of Akpabio Daniel, with Force number 477199, who he claimed fired the bullet that hit him, for the negligent acts.

Kalu also wanted full and complete payment of N2 million being the total cost of his treatment till date and another N200 million as compensation for the emotional, psychological, physical and financial trauma he and his family suffered as well as for his rehabilitation and reintegration into the society as he could no longer do any work to sustain and provide for his family.

He also asked for the full travel expenses to the United States of America for further treatment and prosthetics for his limb.

Counsel for the respondents, James Idachaba, asked for an adjournment to enable the police legal team do its findings as well as study the documents tendered by the petitioner as exhibits for the purpose of cross-examining Kalu.

While adjourning the petition till February 22, the acting chairman, Garba Tentegi SAN, directed the panel secretariat to avail the police with copies of the documents tendered by Kalu and admitted as exhibits.