Persons with disabilities laud Yahaya Bello over inclusion in govt 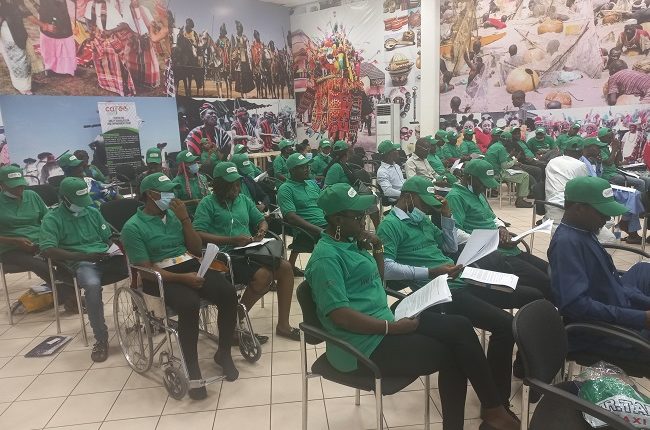 People living with Disabilities (PWDs) in Nigeria have pledged their support for Kogi State Governor, Alhaji Yahaya Bello over his inclusion of PWDs in governance.

The group said Governor Bello had an edge over others in providing sustainable livelihoods for PWDs and offering them leadership appointments even outside disabilities-related government positions in Nigeria.

Professionals and world acclaimed disabilities advocates, who spoke when the Persons With Disabilities gathered for a strategic Seminar on their participation in 2023 politics, pledged their support for Bello, saying “we will support those who support us.”

The seminar with the theme, “PWDs, Politics, Power and Powerlessness”, was organised by the Centre For Ability Rehabilitation and Empowerment (CARE) in collaboration with The Ray of Hope Foundation.

The Chief Responsibility Officer of CARE, Dr Chike Okogwu, who gave the keynote address, commended the Kogi Governor for not only domesticating the Discrimination Against Persons with Disabilities (Prohibition) Act but also towering high above his few counterparts in showcasing the raw abilities of PWDs to succeed and make differences in any assignment they are saddled with.

He said Bello had appointed more PWDs into public offices than any other State Governor in Nigeria had done and urged other governors and indeed all politicians to emulate him.

The PWDs vowed to only support those who prioritise their course and support them like Governor Bello.

Okogwu, a Havard-trained disabilities advocate, also lauded the Kogi Governor for the way and manner he championed the move that PWDs should be included as members of the ruling All Progressives Congress (APC) to the extent of sponsoring advertorials in this regard.

He described the Governor’s efforts as a masterpiece, adding that if other Governors and political leaders could emulate his gestures towards improving the living conditions of PWDs, the country would be a better place for all.

CARE’s Chief Responsibility Officer also praised President Muhammadu Buhari for signing into law the Discrimination Against Persons with Disabilities (Prohibition) Act, 2018, stressing that the Act had turned PWDs from “nobody” to “somebody.”

Okogwu said, “Some State Governments like Plateau, Lagos, Jigawa, Kano, Imo, Anambra, Kogi and very recently, Kaduna have domesticated the Act (Discrimination Against Persons with Disabilities (Prohibition) Act) in their respective states. Some have and others about to set up Disabilities Commissions with all of them appointing PWDs into government as Special Advisers or Personal Assistants on Disabilities.

“A few states have encouraged PWDs to become Permanent Secretaries. One state governor who towers above the rest is the Kogi State Action Governor, H.E. Yahaya Bello, who has appointed more PWDs into differential government leadership positions outside Disabilities related matters to showcase the raw abilities in the capacities of PWDs to succeed.

“Let me also commend Governor Yahaya Bello for the way and manner he led the inclusion of the APC ruling party to bring in PWDs as members. The advert calling for that was also a masterpiece. Well done Your Excellency, Sir! If other Governors and political leaders emulate this, then Nigeria will truly be a better place for all,” Okogwu emphasised.”

Meanwhile, Okogwu urged that PWDs should constitute nothing less than 15 per cent at the Federal Executive Council, State Executive Council and also at the Local Government Councils after the 2023 general elections, adding that such political participation would create huge employment for PWDs.

He stressed that PWDs had the capacity, courage and connections to lead and called on political parties to give free election nomination forms to qualified PWDs to take up elective positions.

He said, “This Talkshop insists that come 2023, persons living with disabilities should have at least 15% composition at Federal Executive Council with other relevant appointments. States too with 15% PWDs as Commissioners and Local Governments with 15,% as councillors and appointees respectively. With these, we would have created huge employment for persons living with disabilities and taking PWDs to the political promised land through political participation.

“The National Assembly and the State Houses of Assemblies are also not left out. We in this hall (event venue) and beyond nationwide are committed to making sure that 15% of their membership is populated by persons living with disabilities in their various constituencies.”

“We know that elections in Nigeria are expensive just like it is all over the world but note that PWDs also have the 3Cs namely, capacity, connections and courage to lead well. To remove all political barriers, political parties will have to lead the way by giving free election nomination forms to persons living with disabilities provided they show the 3Cs above,” Okogwu stated.

‘Why schoolgirls should get free menstrual products’