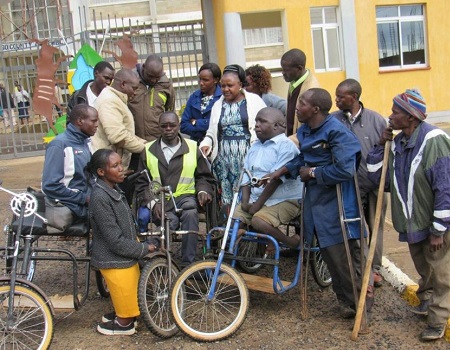 Persons living with disabilities in Niger State in their hundreds on Monday expressed their displeasure and protested against what they described as the shortchanging of their members in the ongoing Special Public Workers Scheme (SPWS) of the Federal Government.

The SPW scheme was expected to provide empowerment to 774,000 Nigerians, 1,000 each from the 774 local government areas across the country.

No fewer than about 25,000 persons in Niger State were expected to benefit from the scheme.

The chairman of the Joint National Association of Persons with Disability in Niger State, Malam Isah Abdullahi, who led other members to the state secretariat of the Nigerian Union of Journalists, (IBB Pen House) in Minna, Niger state capital lamented that despite the directive by the Federal Government that at least five per cent slots be given to Persons Living With Disabilities, only 0.4 per cent was allocated to them.

He said the association had forwarded names of 50 members from each of the 25 local government areas of the state to the National Directorate of Employment, (NDE) which totalled 1,250.

Abdullahi, however, expressed disappointment that when the list of shortlisted persons were released, only two local government areas had considered persons with disabilities, giving them only 100 slots as against the 1,225 names earlier sent.

According to him out of the 25,000 slots given to Niger State, only 100 persons with disabilities have been captured.

He lamented that persons with disabilities have been abandoned by the government at all levels, and were not being carried along in government’s policies.

“We are vulnerable persons. In fact, if there is anybody that should benefit more from any empowerment policy of government, it should be persons with disabilities, because we are more vulnerable to poverty and disaster,” Abdullahi said.

He therefore appealed to President Muhammadu Buhari to come to the aid of persons with disability and ensure that the anomaly was addressed.

Niger State currently has over 300,000 persons living with disability as at the last census in Nigeria.

Out of that figure, at least 20 per cent were said to be beggars on the streets.