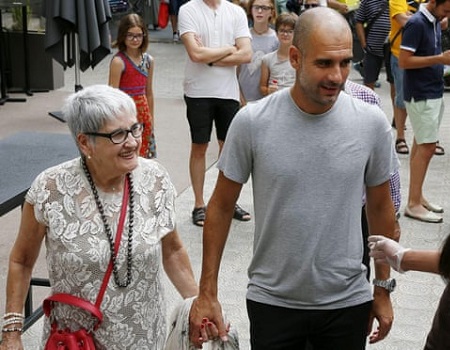 Her death was greeted with  an outpouring of condolences across football for the Manchester City manager and his family.

Manchester City said in a statement: “The Manchester City family are devastated to report the death today of Pep’s mother, Dolors Sala Carrió, in Manresa, Barcelona after contracting Corona Virus… Everyone associated with the club sends their most heartfelt sympathy at this most distressing time to Pep, his family and all their friends.”

Khaldoon al-Mubarak, the chairman, said: “Our prayers and heartfelt sympathies are with Pep and his family at this overwhelmingly sad time. He and they have the love and support of the entire City family.”
Manchester United and Arsenal were among many clubs both domestically and abroad who offered their best wishes. United tweeted: “Everyone at Manchester United is saddened to hear this terrible news. We send our heartfelt condolences to Pep and his family.”

Last month Guardiola donated €1m to the Angel Soler Daniel Foundation and Medical College of Barcelona for the purchase of equipment to fight the virus in Spain. It has killed more than 13,000 people in the country, making it one of the hardest-hit nations.

Dolors was a former employee of a textile factory close to the family’s home in Santpedor, about 40 miles north of Barcelona. She had four children including Pep and Pere, who is a player agent and represents his brother. One of her daughters, Francesca, is a politician who has been Catalonia’s representative to the Nordic countries.

When Barcelona initially wanted to sign Pep as a promising young player, Dolors, along with her husband, Valenti, refused the offer before relenting when the club made a second attempt. Guardiola went on to have a glittering playing and managerial career. He captained the club and was a key member of Barca’s inaugural European Cup-winning side in 1992 before managing the club to two more wins in the competition, securing a treble in 2008-09, his first season in charge.

The Catalan club said: “We at FC Barcelona are deeply saddened by the loss of Dolors Sala during this difficult time, and we would like to express our most heartfelt condolences, especially to Pep Guardiola, his family, and his friends. Rest in Peace.”