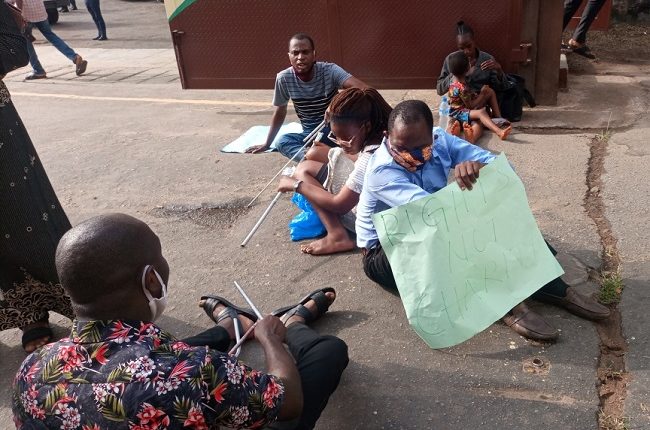 People Living With Disabilities (PLWD) in Oyo State, on Monday, staged a protest at state Secretariat, Ibadan, over what they described as injustice against them in the ongoing recruitment of the state Teaching Service Commission (TESCOM).

Bearing placards and chanting songs to express their displeasure, the protesters questioned the names of 149 persons released which they said was a combination of PLWDs and persons not living with disabilities.

While rejecting the list of 149 persons, they also said the 149 was 201 short of the 350 slots that Governor Seyi Makinde promised them in the TESCOM recruitment.

The protesters who came under the aegis of Coalition of Disability Groups in Oyo State maintained that since Makinde promised five per cent of the 7,000 total job slots, they will not settle for less than that.

Leader of the group, Mr Tolulope Aluko, while addressing the government team at the scene said its scrutiny of the list showed that some on the list are not disabled while some others are non-indigenes of the state.

The protest stalled vehicular and human movements in and out of the State Secretariat, for several hours, with the protesters, with their walking aids, insisting on listening to only Governor Seyi Makinde.

They also chided Executive Assistant to Governor Makinde on Disability Matters, Mr Ayodele Adekanmbi whom they said did not adequately take care of their interest.

Responding, TESCOM Permanent Secretary, Mrs Grace Oderinde explained that the list of 150 was arrived at after a thorough screening of applicants for teaching jobs.

She explained that the state governor approved 200 slots for PLWDs and that the remaining 50 are for non-teaching jobs which is to be released.

She, however, said TESCOM will together with the representatives of the groups investigate the list and identify non-members or those who are not PLWDs.

Her appeal to the protesters to point out those suspected not to be PLWD was welcome and representatives of the coalition went into a meeting with top government officials.

She was later joined at the scene of the protest by the Chief of Staff to the Governor, Chief Bisi Ilaka; the Commissioner for Establishment and Training, Professor Dahud Sangodoyin and some government functionaries.

At the meeting chaired by the Chairman, TESCOM, Mr Akin Alamu, it was resolved that the selection process of PLWD applicants be put on hold until another meeting slated for Friday, 11th December.