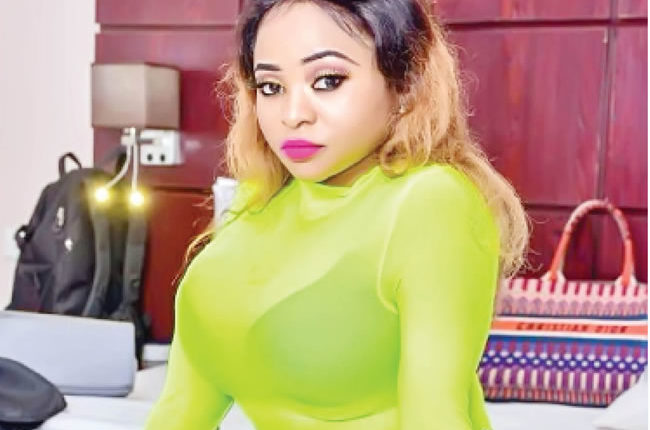 Oluwashola Subair, a Theatre Arts graduate of the University of Ibadan, is an actress and a producer with six movies to her credit. The fast-rising actress, in this interview by FEMI OGUNTAYO, talks about her career and her latest efforts —Excerpts:

How would you describe your experience so far in the industry?

My experience so far in the industry has been amazing, even though there are times one has to face some challenges, which I believe is normal because life is all about ups and downs. As regards the recognition I am getting from my latest movie, ‘69’, well, I think it is good, not bad because it is every actor and actress’s dream, especially the fast rising ones, is to become very popular, relevant and be a household name which I believe very soon, I am going to achieve. The rate at which I am getting publicity with this movie, I believe I am there already.

Tell us about some of the recognitions you have got as a result of this movie that blew your mind?

The rate at which I get booked for adverts and even movie productions has increased massively. I can’t even believe it myself. My phone now rings back to back, the way people want to see me in their movies and all that blew my mind. Even skit makers now call to book me for their skits.

Well, my expectation from the movie is that I want my fans to continue showing me the maximum love and support because without them, there is no me. They are the ones that give me the views, I want to break records on social media and they are the ones that will help me break the records. I believe with God and my mum’s prayer, I am going to achieve it.

Talking about your mum, what was her disposition to the movie, 69?

She is not bothered because she knows the kind of daughter she raised. Besides, she is so sure that whatever I do one the screen ends on the screen. It has got nothing to do with who I am in reality. So, she is good with whatever role I am playing.

How did you manage to get Ibrahim Chatta to play the role he took in ‘69’ and how would you describe your relationship with him outside acting?

Uncle Ibrahim is a fantastic actor and he will deliver whatever role you give to him perfectly, so there is really no big deal in getting him to play any type of role. He has been doing that way before I joined the industry. So, I see no reason why playing such role in my movie should be a big deal. On my relationship with him outside the industry, he is my boss nothing but my boss. I can also call him my mentor.

What is next for Shollycutie after ‘69’? What should your fans look forward to any new project already cooking?

Something way bigger than ‘69’ is already cooking, by God’s grace I am going to unveil it right after I drop the send part of 69. Thank you so much and God bless you. So, keep your fingers crossed, it is going to blow your mind away.

When and how did you join the movie industry?

I have done several stage performances as well as soap operas.  I met Samson Adebayo, a director in the industry, who invited me for a movie role, which I declined. It took me several years before I decided to join acting professionally in 2017. That was how my acting career started.

Since you started acting professionally in 2017, what are the major productions you have done or featured in before your recent movie – 69?

I have featured in several movies that I have even lost count, but as regards my personal productions, I have produced five movies, the movie – 69 is my sixth production. If I can try to remember few of the ones I have featured in, I can say ‘Omo Minister’, ‘Iku L’obirin’, ‘Omo Governor’ and many more.

Can you mention the titles of the five productions and why this new production is so special to you?