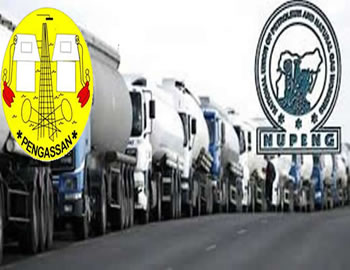 They also commended the federal government for the flag-off and official commencement of crude oil search in the Kolmani Well River-II, located near Barambu, Alkaleri Local Government Area of Bauchi State.

According to a statement jointly signed by the Comrade Francis Johnson, National President of PENGASSAN and Comrade Williams Akporeha, National President of NUPENG, the union stated that “as key stakeholders in the industry, we urge and appeal to this listening administration to accelerate the final executive assent to the entire Petroleum Industry Bill.

“In this Bill, roles and accountability are better clarified; governance and transparency strengthened and inefficiency, maladministration, corruption and secrecy are accordingly tackled, these are quite important and must be upheld.

“We further believe that when passed, it would end unnecessary political interference in the sector and optimize value chain in the upstream, midstream and downstream of the petroleum industry, and as well separate the roles of the policy maker from the regulator and from the commercial institutions,” it said.

The unions regarded the flag off as a full demonstration of Nigerians resilience, doggedness and determination.

“The entire productive oil and gas workers are very proud of this great achievement and we promise to keep raising the bar with other committed stakeholders. Our solidarity remains constant for the Union makes us great,” it said.

“We equally found it worthy to extend our commendations to the Honourable Minister of State for Petroleum Resources, Dr Emmanuel Ibe Kachikwu, the hard working Group Managing Director, NNPC, Dr Maikanti Baru, and their entire team for making February 2, 2019, epochal in the annals of Nigerian history, posterity will surely judge you kindly for being a part of this major and significant breakthrough in our national life.

“The untiring and fantastic efforts of our irrepressible members to the realization of the noble dream are also highly commendable and we praise their uncommon contributions to the growth and development of our dear country.

“There is no iota of doubt in our minds that Nigerian workers have the capacity and ability to deliver even much more than their counterparts in other climes when given the right tools and right working environment/conditions to do so,” it said.

Only Atiku will stop Tinubu from becoming president in 2023, says Dokpesi