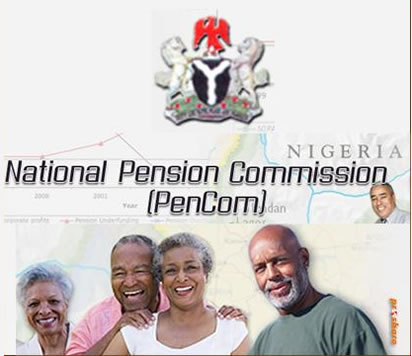 THE National Pension Commission (PenCom) has recovered pension contributions and interest totalling N1.34billion from defaulting employers during the third quarter of 2017.

The Commission in its 2017 third-quarter report posted on its website said it used 55 consultants as recovery agents to get back the outstanding pension contributions and penalties from the defaulting employers.

PenCom said the affected employers were issued with the appropriate notice to remit the outstanding pension contributions.

“During the quarter, the sum of N1.34 billion was recovered, this brings the total recoveries made since the inception of the Recovery Agents’ activities in 2012 to N13.58 billion,” it stated.

This, it said showed an increase of N135.22 billion representing 3.18 percent over the total contributions as at the end of the previous quarter.

Also, the aggregate total pension contribution by the public sector grew by 2.52 percent from N2.20 trillion to N2.25 trillion over the same period.

The statement noted that the commission continued the ongoing refund of contributions made by military and other security service agencies personnel exempted from the contributory pension scheme.

It added that during the quarter under review, the department responsible for military pensions processed 254 applications for the refund.

The statement also indicated that 27 state governments have enacted laws to implement the Contributory Pension Scheme (CPS) as at the third quarter of 2017, while eight states were currently in the process of implementing the CPS law.

The report revealed that Yobe was, however, yet to commence the process of enacting a law on the CPS.