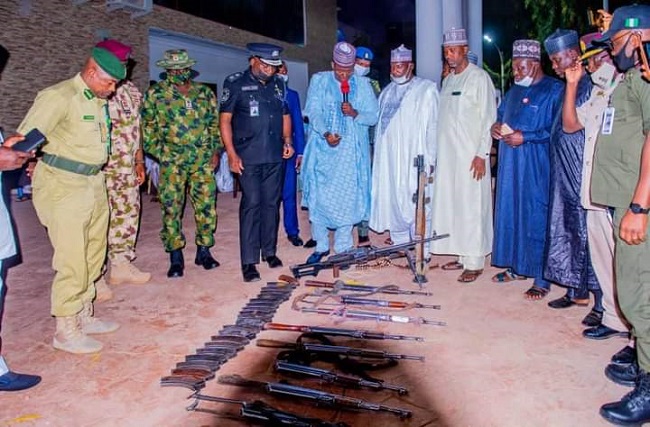 A repentant bandit, Auwalun Daudawa has surrendered 20 AK-47 rifles and other weapons to Zamfara State Governor Bello Matawalle, saying he wants to enrol in school.

He also took an oath with the Holy Quran that he would never go back to the forest.

Thereafter, the governor handed over the weapons to the state commissioner of police, Mr Abutu Yaro.

A statement issued by the Special Adviser on Media and Communication, Zailani Bappa on Monday night, said the bandit with his members decided to surrender themselves because according to them they believe in the sincerity of the governor in the peace deal reached with them.

He also said he surrendered because they were tired of staying in the forest.

According to him, “In all the battles and conflicts so far, I have never feared anything nor got wounded even once.

“I thank God that I am liberated by his mercy and I ask for pardon and forgiveness from the society.”

He said he was no longer interested in going back to the bush, and asked Governor Matawalle to allow him to stay in Gusau and go back to school.

“Governor Matawalle commended the courage of Auwalun Daudawa for embracing peace along with all his team and promised that his administration will never renege on its promise to honour all the terms agreed in the peace deal and will continue to woo others in the bush until there are no more bandits remaining in the state,” the statement added.