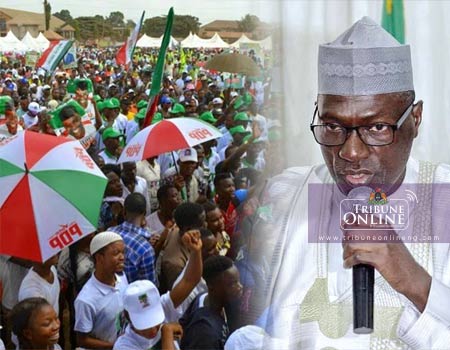 THE gains of the Supreme Court judgment which resolved the protracted leadership crisis of the Peoples Democratic Party (PDP) will evaporate if the party is unable to conduct a credible national convention to elect substantive leaders, Professor Ahmed Rufai Alkali, former National Publicity Secretary, has warned.

Speaking to newsmen in Abuja at the weekend, he noted that the crisis that the party went through was unprecedented, noting that the legal and moral victory achieved by the court judgement must now be complemented by political victory.

He said: “But the challenge now is how the caretaker committee will handle a very organized, transparent and a credible national convention that will carry all the elements along.

“We don’t want to have another fall out after the national convention.”

He said the party must do a deep reflection and make effort to accommodate all members irrespective of their affiliation during the crisis by exploring the processes of credible primaries, congresses and the national convention.

The former party spokesman who was also Special Adviser on Political Matters to the President, observed that the declaration by the Senator Ahmed Makarfi-led National Caretaker Committee (NCC) of the party that there was no victor and no vanquish on the Supreme Court judgment was an important step towards genuine reconciliation.

Alkali added: “I know the party has been going through crises at various times and of different dimensions but the crisis that the party faced in the past two years has been unprecedented.

“Since all of us are living witnesses to what happened and how this crisis evolved and led to last Wednesday (Supreme Court’s decision), this is the time not necessary for jubilation but for deep reflection.

“We have to ask ourselves what went wrong and to also know that it is not over until it is over because in politics, you need at least three levels of victories.

“You need the legal victory, the political victory and the moral victory.

“From what I can see now, we have the legal and the moral victory meaning that legally, we have found ourselves in a situation where the highest court in the land has passed a judgment that is very popular among Nigerians and that means that morally, our leadership has managed this situation up to this time and it is recognized, legitimate and competent under Senator Ahmed Makarfi and his team, the caretaker committee members.

“The political victory now is that we have to reconcile because over the past two years, there have been tensions even in the state chapters.

“There have been a lot of acrimonies and tendencies to cause divisions within the state chapters. I am happy to say that the position of the caretaker committee as articulated by Makarfi that there is no victor, no vanquished, is a very good start.

“There is need for reconciliation. There is opportunity for accommodation to carry everybody along.

“But it is not only at the national level but it should also be done at the state level. We should also avoid those same very issues that led us into this trouble.”

Alkali stated that he was confident that nobody would be shut out of the party for the role played during the crisis, especially those who he observed left the PDP out of anger.

According to him, “Already, Senator Ahmed Makarfi and other leaders of our party who spoke immediately after the Supreme Court judgment were all on one page that the door remains open and is open not only for Sheriff but for all members of our party who deserted the party out of anger, frustration and bitterness.

“That opening of the door is the most important point and I believe that in this process of reconciliation, it is very important that people put Nigeria first and put the party also first.

“If you are fighting to serve this country, then it doesn’t have to be personalized. Whatever happens, there should be only one leader of the party at any given time but what is important is that everybody should be carried along.

“I believe that the kind of people we have at the caretaker committee are people who are competent and open-minded because you could see that during the crisis, they avoided as much as possible, to open more ranks of conflict within the party.”