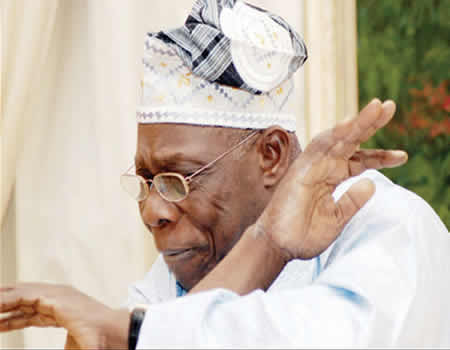 The troubled Peoples Democratic Party (PDP) has, again, been dealt another  blow by former President Olusegun Obasanjo who declared on Friday that the party had gone beyond redemption with its fortune lost.

Alluding to the downward trend in the affairs of the political party, the former president prayed that the fortunes of the country would not sink like that of the PDP.

He made the declaration in his remarks during the display of 40 African traditional drums, organised by the Centre for Black and African Arts and Civilisation (CBAAC) as part of the activities to celebrate his 80th birthday anniversary, held in Abeokuta, Ogun State, on Friday.

The former president, who recalled that the fortunes of the party were very bright between 1999 and 2007 when it was in control of 30 out of the 36 states in the country, noted that the party mismanaged the fortune and destroyed its own destiny.

He ascribed the dwindling fortunes of the former ruling party to the exit of its prominent and founding members, including himself and one of its former national chairmen, Senator Ahmadu Ali.

Obasanjo recalled how he invited Ali to be the PDP national chairman and the great works that he claimed that he did in making the party the biggest in Africa.

He described Ali as a truthful and hardworking personality, adding, “Ali is a man of truth and hardwork. He is so good that I looked for him to come and be chairman of PDP. He chaired the party when it controlled 30 out of the 36 States.

Reacting however, PDP National Publicity Secretary, Professor Wale Oladipo, simply told Saturday Tribune, “I have no comment on that o.”

Nigeria destined to be great-former US Ambassador

Meanwhile, former Ambassador of the United States of America to the United Nations (UN), Mr Andrew Young, has observed that Nigeria is a nation destined to be great.

He made the observation while speaking at a symposium organised by the Centre for Human Security, an arm of the Olusegun Obasanjo Library, still as part of the activities to mark the 80th birth anniversary of the former president.

Speaking on the topic, “Purposes and Utilitarian Values of Presidential Libraries”, Young, who cited Obasanjo as an example, noted that Nigeria had produced great minds that had done great things and respected all over the world.

“I have seen Nigerians abroad. They are brilliant, intelligent and hardworking and respectable,” the former US diplomat said.

While expressing concerns that Nigeria was yet to fully realise and appreciate its great destiny, Young likened the country’s destiny to the Biblical Israelites whose ancestors were in slavery for several years, in spite being destined by God to be great.

“The slavery of Nigeria is corruption, laziness, selfishness and refusal to realise that she is a nation destined to be great”, he said, even as he expressed optimism that the country was set to be liberated itself from whatever it had become slave unto.

The former US ambassador described the Olusegun Obasanjo Presidential Library (OOPL), billed for inauguration today, as one of the platforms that would launch Nigeria into enviable heights among nations of the world.

“I see the library as something that will not only teach young Nigerians about their rich heritage, but will also point them to the great future of the nation. I see the nation, Nigeria, rising and occupying a significant position like China, US and other great nations of the world,” he said.

Former Permanent Delegate of Kenya to UNESCO, Ambassador Mary Khimulu, also described the library as “a new African record”, pledging to be an ambassador of the library and called for more of such projects in Africa.

Former Secretary General, All-Africa Association of Students’ Union, Mr Fred Awaah, described the library as a pride of the African Continent and expressed joy that the work would serve as a catalyst and engender a re-awakening among African leaders.

Disclosing that two other similar projects were ongoing in the continent, Awaah said, “Such libraries would afford us the opportunity to tell the world our stories from our own perspective rather than have it misinterpreted by other people.”

‘She brandishes cutlass at me any time we fight’