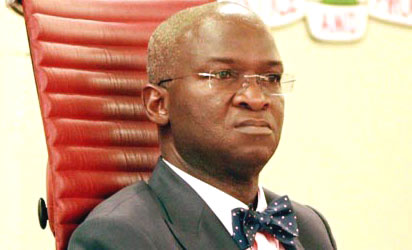 The Peoples Democratic Party (PDP) has called on the Minister of Works and Housing, Babatunde Fashola, to immediately come clean on reports alleging that N4.6 billion public funds had been funnelled into private accounts during his tenure as Minister of Power, Works and Housing.

In a statement issued by Kola Ologbondiyan, National Publicity Secretary, in Abuja on Wednesday, the main opposition party also charged the Muhammadu Buhari Presidency to speak out on the report which, it said, has further exposed “the rot and humongous corruption going on in ministries, department and agencies under its watch, despite the much orchestrated anti-corruption stance and ‘holier than thou’ attitude of its officials.”

The PDP observed that Nigerians were shocked by the revelations that between September and December 2019 alone, the sum of N4.6 billion was stolen through fraudulent payments in 654 tranches, without any explanatory details to 21 private accounts belonging to some faceless individuals and certain directors in the then Ministry of Power, Works and Housing, under Fashola.

It added: “It is indeed appalling and of course revealing that such huge fraud, which is in direct contravention of Sections 7, 701 and 713 of our nation’s financial regulations reportedly occurred under Fashola’s watch.

The PDP urged Nigerians to note that the pattern and route of the alleged fraud point to a high-level conspiracy to funnel out funds from the ministry to service some higher interests, which must be unravelled and the funds immediately recovered.

The PDP further said: “Nigerians can now see why the nation’s power, housing and road infrastructure had remained in shambles despite the huge resources allocated for development under the Buhari administration.

“The public can now see how officials in the Buhari-led All Progressives Congress (APC) administration are recklessly plundering and looting resources meant for national development and blaming it on past administrations.

“Nigerians now know why our nation has been reduced to a beggar nation and why resources never get to projects they were voted for under the APC.

“If a whooping N4.6 billion is exposed to have been stolen in a space of two months in one ministry, one can only imagine how much has been stolen in the last five years in various ministries and departments by officials of the Buhari administration.

“Moreover the silence by Fashola and the Buhari Presidency over this very weighty revelation is heightening apprehensions of complicity in the public space.”

The PDP, therefore, called on the Economic and Financial Crimes Commission (EFCC) to take steps to invite Fashola and all those mentioned in the alleged fraud and ensure that the law takes its course on anyone found wanting.

Former Ekiti state governor, Mr Ayodele Fayose, has congratulated Edo State governor, Godwin Obaseki, on his victory during last Saturday’s governorship poll, calling on him not to return to the All Progressives Congress (APC).PDP tasks Fashola

Obaseki who joined the Peoples Democratic Party (PDP) in June after he was disqualified by the APC, defeated Pastor Osagie Ize-Iyamu of the APC in the election results announced by the Independent National Electoral Commission (INEC) on Sunday.PDP tasks Fashola  PDP tasks Fashola

A Kano based industrialist, Chief Kalu Ogbonnaya, has advised the Federal Government to take necessary steps to stimulate the nation’s economy to prevent a recession post COVID-19.PDP tasks Fashola

Ogbonnaya who spoke in an interview with the News Agency of Nigeria (NAN) on Thursday in Kano, said as a result of the coronavirus raving the world, no business has been moving.PDP tasks Fashola

2021 budget will be presented December 3 ― Senate