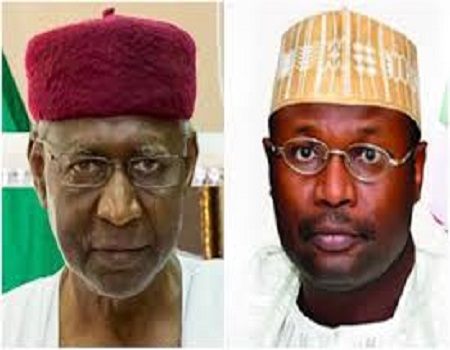 THE Peoples Democratic Party (PDP) has raised alarm over the Friday closed-door meeting between the Chairman of the Independent National Electoral Commission (INEC), Prof Mahmood Yakubu, and the Chief of Staff (CoS) to the President, Abba Kyari, at the presidential villa, Abuja.

The main opposition party in a statement issued by Kola Ologbondiyan, its National Publicity Secretary, in Abuja on Sunday charged President Muhammadu Buhari not to allow his personal ambition to push the nation into chaos.

It also cautioned the Yakubu not to succumb to pressure to manipulate the electoral process for President Buhari as such could cause serious crisis capable of disarticulating our nation.

ALSO READ: Why Atiku is best for Nigeria now ― Group

The party warned that President Buhari’s handlers, who it said are desperate to force him on an unwilling nation, are fast pushing the nation to the brinks and should be checked before it is too late.

According to the statement, PDP’s fresh caution to INEC Chairman is predicated on an alleged secret meeting he held with President Buhari’s Chief of Staff at the Presidential Villa last Friday.

The statement added: “Prof Yakubu should note that the polity is already tensed over INEC’s listing of President Buhari for election despite his failure to present the constitutionally required academic credentials like other candidates. This development casts a dark shadow on the credibility of INEC to conduct a transparent election.

“INEC is invited to further note that Nigerians are aware that by President Buhari’s declaration, in an affidavit, that his said certificates are with the military, his nomination documentation is therefore constitutionally incomplete, making him ineligible to contest the 2019 Presidential elections.

“Also, by failing to write to the military authorities to release his claimed certificates, Mr President leaves Nigerians with no option than to hold that he does not have the credentials and the 1999 Constitution (as amended) did not provide that affidavits can be used as a substitute for any candidate’s credentials.

“Moreover, Mr President’s affidavit also shows that he did not submit any certificate in 2015, making his candidacy for that election improper and defective under our laws.

“Prof Yakubu must have noted the heavy public criticisms that have been trailing his provocative declaration that Nigerians should go to court over the certificate saga. His statement betrays an electoral umpire who is under threats and heavy pressure to abdicate his statutory duty of enforcing constitutional requirements for elections.”

“The PDP holds that allowing such siege mentality on our democratic institutions to fester will surely spell doom for our nation. Nigeria is our country and we don’t have any other nation we can call our own.

“Now that Nigerians have rejected President Buhari’s affidavit and insisted on his certificates, the All Progressives Congress (APC) is left with no option than to accept its self-inflicted misfortune.”

It further stated: “Meanwhile, we are not unaware of the anxiety and apprehension in the APC but such is the price of being stuck with bad merchandise.

“On our part, the PDP is ready for election. Our candidate, Atiku Abubakar, with his proven competencies, has met all the requirements for the election and is now enjoying the support of the overwhelming majority of Nigerians across all sections of our country.

“Nigerians are tired of a deceptive, dishonest and grossly incompetent Buhari administration, which has brought so much anguish and pain to our nation.”