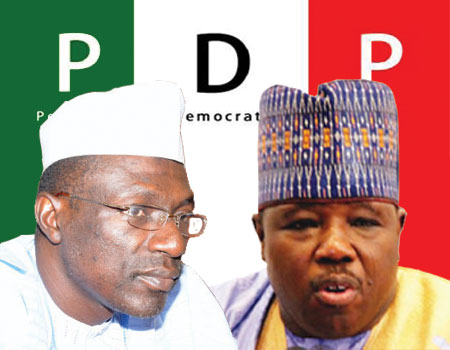 THE National Caretaker Committee (NCC) of the Peoples Democratic Party (PDP) led by Senator Ahmed Makarfi is poised to have its tenure extended to give it enough time to execute a proper national convention to elect a new substantive national leadership for the party.
Towards this end, the national organs of the party which ended their meetings in Abuja on Tuesday have agreed to convene a non-elective national convention of the party on August 12, 2017 where the decision is likely to be taken.
The tenure of the NCC is scheduled to end August 16, 2017 at which time it would have been impossible for the committee to organize a national convention because of the statutory 21 working days notice of convention to be given to the Independent National Electoral Commission (INEC) as well as satisfying its own constitutional requirements.
The NCC was set up by the May 2105 National Convention in Port Harcourt with a tenure of 90 days but had its tenure extended by one year in the August National Convention that also took place in the Rivers state capital.
The National Executive Committee (NEC) of the party rounded off the meetings of party organs on Tuesday, coming at the heels of the National Caucus and Board of Trustees (BoT) which had earlier met to harmonize positions now ratified by NEC.

The trilogy of meetings followed the Expanded National Caucus held on Monday and graced by former President Goodluck Jonathan.

They signaled the return of the former ruling party from the nearly two years of hiatus that it was thrown into by a protracted leadership crisis which had ripped into two factions at all levels.
The meetings afforded prominent members of the party from across the country to reunite at a choked Wadata Plaza, Wuse Zone 5, national secretariat of the party which has bustled with activities since the Supreme Court ruled in favour of the NCC last Wednesday.
The National Publicity Secretary of the party, Prince Dayo Adeyeye, briefed newsmen on the outcome of the meeting.
He said: “We took a decision on the national convention. I want you to recall that on May 21st 2016, there was a national convention in Port Harcourt which set up a Caretaker Committee and the tenure was supposed to be 90 days.
“That Caretaker Committee went to work and convened another convention on August 16, 2016. That convention in Port Harcourt could not elect new national officers due to circumstances that are well known to you.
“The convention then asked the National Caretaker Committee to continue in office for another 12, the tenure of the caretaker committee was extended for another 12 months which will lapse on August 16, 2017.
“The prolong litigation of the leadership tussle ended only last week on the 10th of July 2017 when the Supreme Court finally gave judgment in favour of the National Caretaker Committee.”
He said with the short time left before the expiration of the tenure of the NCC, it would be practically impossible to hold an elective national convention before August 17, 2017 because of the statutory notice to INEC and also meeting the provisions of the PDP constitution.
Adeyeye revealed that in consideration of this, NEC  invoked the powers conferred on it to convoke a non-elective special convention on August 12.
The special non-elective convention in Abuja is therefore expected to extend the tenure of the NCC to afford  it enough time to conduct a proper national convention.
The party spokesman also noted that NEC has approved the removal of “illegal” state caretaker committees set up by the ousted National Chairman of the party, Senator Ali Modu Sheriff.
According to him, “you will recall that immediately after the Court of Appeal judgement on the 17th of February in Port Harcourt, which gave victory to Ali Modu Sheriff that time, he set about installing Caretaker Committees in some states of the federation, particularly in Jigawa and Benue states.
“The Ali Modu Sheriff group them in authority set up Caretaker Committees in both Jigawa and Benue and tinkered with the excos of some other states.
“So, we brought a motion before her NEC today and the motion was duly passed.
“NEC declared and affirmed the leadership of the party in the two states of Jigawa and Benue that emerged after the April/May 2017 congresses.”
He said the second part of the resolution was that all state Caretaker Committees and state parallel executives set up after February 2017 are to be reversed.
NEC also set up a standing disciplinary and reconciliation committees in view of the crisis that had dogged the party for nearly two years.
Adeyeye said NEC has directed the NCC to immediately constitute and inaugurate the committees.
NEC also took a decision on proposed constitutional amendment of the party and circulated the copies to party members to study, digest and make inputs.
Adeyeye affirmed that the party was ready for the forthcoming Anambra state gubernatorial election.

PDP chairmanship: Some aspirants tried to bribe me —Makarfi