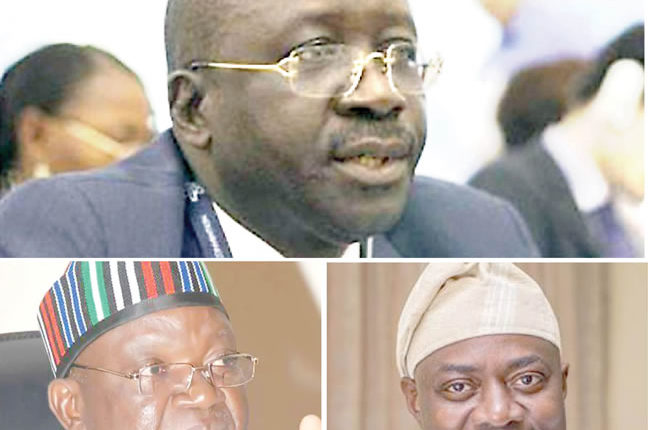 Taofeek Lawal, in this report, examines the travails of past Peoples Democratic Party (PDP) national chairmen and how governors always have their way in the running of the party. Will the period of Iyorchia Ayu usher in a paradigm shift; what new thing is the former president of the Senate bringing on board?

Barring any unforeseen circumstance, a president of the Senate in the aborted Third Republic, Senator Iyorchia Ayu, will shortly lead other ‘chosen’ National Working Committee (NWC) members of the Peoples Democratic Party (PDP) for the next four years and possibly to the 2023 general election. Though there are 18 registered parties, the focus of Nigerians are the ruling All Progressives Congress (APC) and the main opposition PDP as the general election is fast approaching.

It is recalled that Ayu emerged through a consensus arrangement by the party leaders, including governors elected on its platform at the convention of the PDP held at the Eagle Square, Abuja on October 31, 2021. He was earlier endorsed by all the 13 PDP governors on October 14 at the Bauchi State Governor’s Lodge, Asokoro in Abuja. Ahmadu Fintiri, Adamawa State governor and chairman of the Convention Organising Committee, said the decision to endorse Ayu was taken after a  former Governor of Katsina State, Ibrahim Shema and a former House of Representatives member and a Senator , Abdul Ningi, withdrew from the chairmanship race “in the spirit of ensuring that PDP emerges and benefits from our efforts so that we can win together for Nigerians in the 2023 general elections. Ayu has emerged as a consensus candidate of the north. With this, we are fully prepared, we are ready. We will be talking with our colleagues from other parts of the country, especially the south, they see reasons for this consensus candidate. All of them were immensely qualified but through discussion and reconciliation, we have emerged with a consensus list that was endorsed by the candidates themselves. There was no election and there was no selection.”

Ayu, while accepting to lead the PDP, promised not to pander to the whims and caprices of anyone. In fact, his assurance was not to be a northern candidate but for all Nigerians. According to him, the PDP has come to save Nigerians from the problems the ruling APC has plunged Nigerians into since 2015. He said: “We will work tirelessly after the convention to rebuild the party to take over power to rebuild the country. I believe all Nigerians missed the PDP government. Our 16 years moved the country forward… It will be an all-inclusive administration of the party. We will work collectively; we will introduce policies that will be acceptable to all Nigerians.”

In the opinion of some observers, having 14 chairmen in a spate of 22 years does not bode well for a party that wants to run Nigeria. According to them it is on record that most of the chairmen did not complete their terms as they were replaced at will. When they were not at loggerheads with the president on crucial issues, they often hardly were on the same page on political thoughts with party leaders from their respective states, especially the governors. Thus, the PDP produced chairmen who had issues with the governors of their states and at a time, the party declared that national chairman would no longer come from where it has a sitting governor. This is to forestall constant clashes between the chairmen and the governors of their states, as some pundits noted that governors tend to wield awesome powers in politics. One of the observers said the governors determine how parties are to be administered. So, most of the chairmen fell by the way side during survival battles with the governors who most times are instrumental to their ascension to power. Although, most of the chairmen never had it smooth while in office, Ogbulafor, Nwodo, Bamanga Tukur, Modu Sheriff and recently, Uche Secondus fought the battle of their lives to retain their offices, they had their say but the governors had their way.

The governors, whether in the PDP or in the APC, remain the most powerful stakeholders in party politics in Nigeria. Some observers also say the state chief executives subtly influence the president’s decisions most times through the Nigeria Governors’ Forum (NGF), the umbrella body of the governors irrespective of party affiliations.

The October 30, 2021 PDP convention produced most of the NEC members through the consensus arrangement. But it was widely reported how the governors had their way by ‘convincing’ some aspirants to step down for their (governor) preferred candidates. There was a lot of behind-the-scene arrangements, which later threw up the members expected to run the PDP for the next four years. The governors and even a former governor produced the national chairman, vice chairman (South), the national secretary and the national legal adviser. Benue State governor, Samuel Ortom brought Ayu, his Oyo State counterpart; SeyiMakinde produced Ambassador Taofeek Arapaja as vice chairman (South); Governor Nyesom Wike of Rivers State brought on board Senator Samuel Anyanwu as the national secretary and a former governor and the immediate past Senate President, Bukola Saraki has his candidate, Kamaldeen Ajibade as the national legal adviser. But how long will this romance last among the leaders?  Will the new set of national officers soon assert their authority and independence without causing an eyebrow? The Wike/Secondus face-off cannot be forgotten in a hurry as the once close allies later differed on issues, throwing jabs at each other in the process. Wike against all odds was instrumental to Secondus’ emergence as PDP national chairman in 2017.

The view being expressed in some circles is that Ayu may just be a stop gap for the party’s presidential aspirants to negotiate their way to power. Although, the four-time minister and university lecturer is not a neophyte in politics. Nonetheless, many are curious about how he would go about to avoid what many now describe as banana peels in politics in Nigeria. There are reports that should PDP zone its presidential ticket to the North, Ayu will have to step aside as the chairman for a southerner for the party to balance the North/South arrangement as the presidential candidate and the chairman cannot come from the same geopolitical zone. But Ayu has said he is ready to quit as national chairman if the party’s presidential candidate emerges from the North as he wants the best for the country and especially Nigerians, who he said have suffered untold hardship in the hands of the ruling APC. He said, “I am a very democratic person and I will do everything to promote the interest and image of my party. If the PDP says I should step down after a presidential candidate emerges and happens to be from the North, I will be very glad to do so because what we want is to take over the government and run the government in the interest of Nigerians. So, I will sacrifice anything to ensure that my party wins.”

A prominent member of the PDP and two-time member of the House of Representatives, Honourable Godfrey Ali Gaiya, said Ayu with his wealth of experience in politics, academia and with native intelligence, has come to give the PDP a new lease of life and will lead party to victory in the 2023 general election. Gaiya, a former chairman, House Committee on Sports, who also served in various committees during his time at the Green Chamber, believed Ayu would do what the PDP leaders want to salvage Nigerians from APC government.“Senator Ayu is an elder statesman that has gone through virtually all facets of service to Nigeria. He was a lecturer, an ASUU unionist, an elected senator, an elected Senate President, a minister of the Federal Republic amongst so many other records of service. He is bringing into the PDP national chairmanship a lot of credentials and wealth of experience,” the former lawmaker said. He added: “He understands the PDP terrain very well having been a founding father. He is well respected in the party and as an astute administrator. Being a straight forward person, he is not likely going to compromise on party guidelines and constitution. He is a known disciplinarian and will apply the rules of engagement. PDP is lucky to have someone of Senator Ayu’s disposition at this moment and is the right man to reposition the party to win back power to PDP come 2023.”

Makinde has not disappointed retirees on pensions, gratuities — NUP secretary