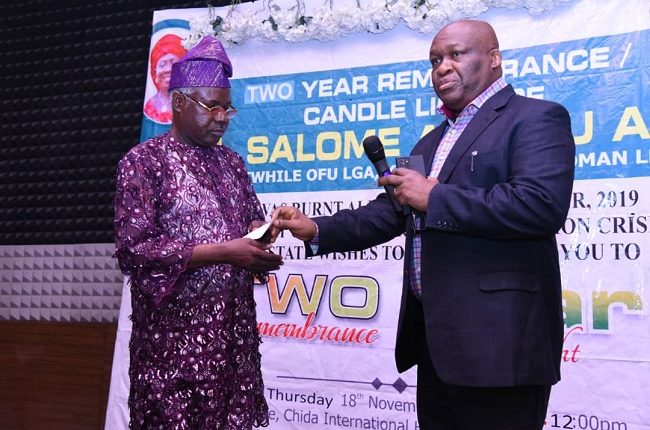 The Peoples Democratic Party (PDP) has honoured Mrs Salome Abuh, the Kogi State women leader who was burnt alive in her house during the 2019 general elections.

Tribune Online reports that Abuh was gruesomely murdered on November 18, 2019.

Director-General of PDP Governor’s Forum, Cyril Maduabum, said the party has donated N10 million to a foundation established in Salome’s honour to help rebuild houses destroyed during the period of the ugly event.

He stated that “we decided to show presence here because we feel that the impunity as represented by the event that we are commemorating today has continued.

Maduabum said “yes we have state governors who can do their best, but the security architecture is such that governors are powerless to act.

“The PDP governors have repeatedly called for the rejigging of the security architecture of the country in such a way that policing can be decentralized. But of course, there must be proper safeguards because if you have some governors that promote violence, then it is also very dangerous to leave such security in their hands. We believe that there should be proper checks and balances to ensure that security prevails in Nigeria.”

On his part, the widower, Simeon Abuh said “my wife was 60 years old, mother of 4, a grassroots politician, mobilizer and community leader of a repute. She was an outstanding woman leader for the PDP in Kogi State, since the early years of her political career.

“We are here, two years down the line, to hold a memorial/fundraising in her honour and to use this opportunity to make a passionate appeal to deliberately consider our homelessness as an emergency to enable us own dream home again.”