PDP has what it takes to improve Nigeria’s economy —Tanimu 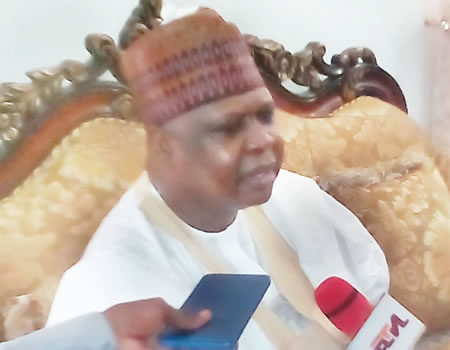 Kabiru Tanimu is a Senior Advocate of Nigeria (SAN). He was Minister of Special Duties and Chairman, Federal Government team on amnesty negotiation with the Boko Haram insurgents under former President Goodluck Jonathan. The Kebbi State born lawyer and politician was in Birnin-Kebbi last weekend to intimate his supporters and elders of his intention to seek the party’s presidential ticket for the 2019 general election. AYODELE AJOGE, who was there, presents excerpts of an interaction with him.

You have indicated interest to run for the presidency in 2019. What are your cardinal programmes?

This is not a declaration as such but what I did was in continuation of my consultation with stakeholders, elders and party supporters across the country. They called on me to get ready for the ticket of my party the PDP to run for the number one post of this country. I therefore decided to come home to discuss and seek the opinion of my people who are my immediate constituency. As you may have noted, I had a long stretch of discussion with the stakeholders of the party, the local government and the state leadership and I did inform them of the call upon me to run for the presidency of this country by traditional rulers, the business community and other stakeholders. I decided that it is incumbent on me to come to my state and hold discussions with my people and put a critical question to them whether it is worth it for me to join the race and the resounding response from them was that I should join the race. With this assurance, with this support with the leadership of PDP in my state, I think the stage is now set for me to discuss with other stakeholders across board to make formal my declaration to join the presidential race to seek the ticket of my party.

With what Nigerians are witnessing in the present leadership of the country, what new things should we expect from you?

For me, I am going to draw inspiration from the manifesto of our party and I am going to look into the programmes the PDP has drawn for the past 16 years when we ruled this country. Beyond that, there are three key issues that my party is very concerned about. Number one is the issue of economy; the PDP made Nigeria’s economy the biggest in Africa; it became investors’ haven in Africa. Unfortunately today, Nigeria’s economy is in a very sorry state. Number two is the issue of security; everybody knows what the situation was under the PDP. What the APC had against us in 2014 and 2015 was the issue of security, but we are all living witnesses as to how the PDP was able to improve on that. I had the privilege of being the chairman of the committee that dialogued with the insurgents; we all knew what we did to cripple the wings of those insurgents who were not willing to dialogue. Today, the APC government keep telling Nigerians lies by saying they have degraded Boko Haram.

Number three is the issue of corruption. Never in our history as a nation since the amalgamation of Nigeria over a hundred years ago have we seen the kind of corruption we are faced with under the leadership of the APC. The war against corruption being fought by the Federal Government is lopsided.

How do you intend to tackle these issues if elected?

The first thing anybody who is going to fly the PDP flag would do is to draw his aspiration from the PDP manifesto. We have a programme; I will not bring anything outside what is in the programmes of the PDP. Our programmes worked before and I believe they will work again.

On the issue of the economy, the PDP has what it takes to improve on the economy. As far as the issue of corruption is concerned, we started from within our party. We stated that we would start the investigation from our members. I know of people who have been accused of corruption and unwholesome practices, but are walking the street head tall today. They found themselves in the APC and became ‘saints’. When the time comes, we will right the wrong; we will do things holistically; we will do things with sincerity; we will do things transparently and with integrity because this APC government lacks integrity; this government lacks credibility.

Many of the governors who collected the Paris Club refund did not use it in paying workers’ arrears. If elected president, how would you tackle this?

If you ask Nigerian workers, they will tell you not only do they know me, but indeed I am a friend of the Nigerian workers. I have had the privilege of being a Minister of Labour for nine months; I was even a supervising minister as at that time and as at then, there were 23 different labour unresolved issues and I was able to resolve them before I handed over to the person who took over from me as substantive minister. It is not that Nigeria is poor; it is not that Nigeria does not have the resources, but those resources are poorly managed.

Leaders and business of risk-taking