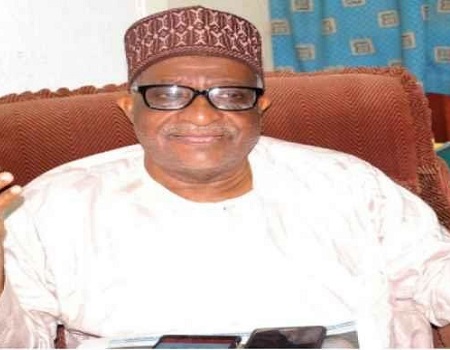 THE Chairman of the Board of Trustees for the People’s Democracy Party (PDP), Senator Walid Jibrin has said the party is happy to donate former Senate Minority leader, Senator Godwill Akpabio to the All Progressive Congress (APC).

Speaking with newsmen in Kaduna on Wednesday, Jibrin also condemned the siege at the National Assembly.

According to him, ‘Nigeria is in danger as a result of the political hullabaloo going on in the country as typified by self-centeredness, political manoeuvring, and the quest for power.

He said such new practice will never take us anywhere but to our doom.

‘The pomp of power, boast of heredity and self-centeredness will lead people to their graves. We should always believe that power comes from God. He gives it to who He wants, take it from who He likes and give to who He likes. He has bounties unlimited.

Commenting further, he posited that the recent defections of some members of the party to APC should be seen as democracy, saying, they should therefore never be condemned but praise.

Also, the BoT chairman said the purported resignation of our Minority Leader, Godwill Akpabio is also an act of democracy, pointing, the PDP is happy to donate Senator Godwill Akpabio to APC.

‘On behalf of the BoT, we wish Akpabio bye-bye and safe journey, however, he remarked, ‘we want to advise him to learn from history especially from those that left us and are now returning in troops.

The PDP leader also advised it’s presidential aspirants to carry their campaigns in a manner that should not deviate from the goals and objectives of the Party, saying, they should stop running their campaigns on unnecessary rumours that will ruin their efforts to be true president of Nigeria.

He disclosed that all efforts are on the ground by BoT to bring all the PDP presidential aspirants together to consider how best they should accept one of them to stand.