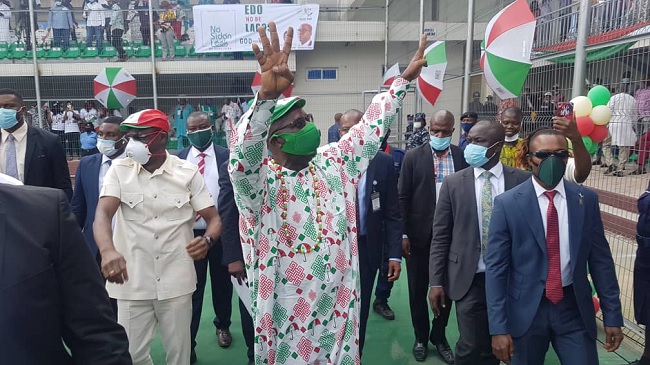 The Peoples Democratic Party (PDP) has hailed the judgement of the Supreme Court which upheld the election of Edo State Governor Godwin Obaseki, describing it as the inevitable triumph of the will of the people over anti-democratic forces.

In a statement issued by Kola Ologbondiyan, National Publicity Secretary on Friday, the PDP asserted that the verdict of the apex court in throwing out the petition of All Progressives Congress (APC), is a resounding reinforcement of the popularity of the PDP and Governor Obaseki in Edo state, as firmly established in the election.

The party urged Governor Obaseki to continue in his commitment towards the development of the state and the wellbeing of his people in line with the manifesto and ideology of the PDP; “the very reason he was overwhelmingly re-elected as governor of the state.”

The PDP expressed pride in “the empowerment of the people as well as massive infrastructural development of Edo state in critical areas of healthcare, education, agriculture and food production, oil and gas, industrialization among others.”

The party also commended the judiciary for its courage in upholding justice and the will of the people in the Edo governorship election.

On Monday, October 25, 1993, in the heat of June 12 annulment agitations, four Nigerian youngsters, Richard Ajibola Ogunderu, Kabir Adenuga, Benneth Oluwadaisi and Kenny Razak-Lawal, did the unthinkable! They hijacked an Abuja-bound aircraft, the Nigerian Airways airbus A310, and diverted it to Niger Republic. How did they so it? Excerpts…PDP hails Obaseki’s victory  PDP hails Obaseki’s victory

Voting in Lagos APC primaries at Ijaiye Ojokoro yet to commence at 1:00pm