PDP and its game of musical chairs 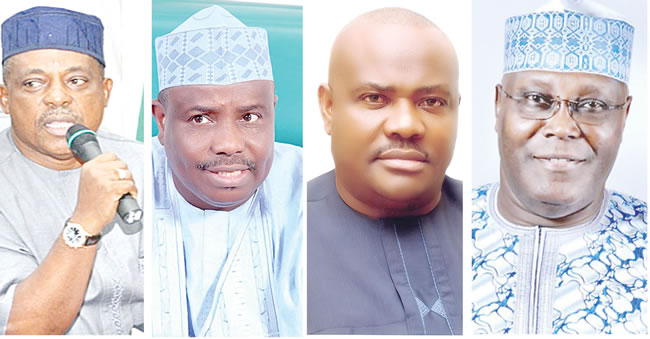 The Peoples Democratic Party (PDP) is back to the trenches again with internal contestations threatening to rip it apart. LEON USIGBE examines the issues the main opposition party has to contend with.

Prince Uche Secondus is hanging on by a thread to his post as the national chairman of the Peoples Democratic Party (PDP). It is de javu. The party has been on that road many times before. It is back to the game of musical chairs. The late Chief Solomon Lar, as well as Chief Barnabas Gemade, Chief Audu Ogbeh, Prince Vincent Ogbulafor, Dr Okwesilieze Nwodo, Alhaji Bamanga Tukur, Adamu Mu’azu, and Senator Ali Modu-Sheriff have been in the shoes and can relate to the pressures around Sercondus at this time.  All were hounded out of office by internal political intrigues. So, for the current national chairman, he may just be fulfilling his predestined rite of passage like others before him. Is it his time to be shuffled out? This has become the question on many lips.

The PDP is a party that thrives on internal contestations with the zenith being the rebellion of some of its leading lights just before the 2015 general election, leading to its ouster from power after 16 years. But before that cataclysmic fall from grace, the PDP had managed to patch up its differences and prevailed in every election, due to the presence of a father figure in the president from the then ruling party. Things have changed for it as a party in opposition with obviously less wherewithal to manage internal differences. Herein lies the differences between the consequences of previous leadership crises and the present one.

Secondus is due to end his four-year tenure in December 2021, assuming he is not re-elected. But certain figures in the party cannot wait that long to see the back of him. For them, he must leave now to pave way for a caretaker committee lest he maneuvers his way, remains on the seat, and constitutes an obstacle to their interests.   Seven elected members of the National Executive Committee (NEC) of the party resigned last week Tuesday in a move designed to force him out of office citing their non-inclusion in the party administration. Their situation in the party is strange. Even though they are deputies to members of the National Working Committee (NWC), the constitution of the party excludes them from being substantive members of the committee. One of them has made a u-turn, withdrew his resignation and pledged loyalty to Secondus. But the resignation had already set off a chain of events. Sunday Oke-Ude who is the National Youth Leader of the PDP and member of its NWC launched an open verbal on the party boss, accusing him of gross incompetence to lead.

He said: “Mr. Uche Secondus, the national chairman of the party is incompetent of managing the affairs of this party. He lacks managerial capacity to manage PDP. He had made sure that many departments of the party did not function as effectively as it ought to function. Mr. Chairman has nothing to offer to the party only to come here and deceive us. There is a sharp division in our NWC right now, not only me, many more NWC members are more aggrieved than myself. Today, I have asked him in our NWC meeting to resign his position as the chairman of this party because he cannot lead this party to victory. I am also asking the leaders, the governors, the founding fathers, the youth, the women to rise up to rescue our party from the hand of incompetent leader like Secondus because he is not willing to take us to anywhere. He is just there to make sure that he enriches himself. I am here to make it very clear to all Nigerians that if Secondus does not resign from the party, I am going to leave the party for him to eat the party and own the party. The governors, if they don’t wade into this matter right now, I assure Nigerians that within the next three, four days, my letter will be public.” It was an alarm bell the PDP needed to activate its internal crisis resolution mechanisms. Its Board of Trustees (BoT) has stepped in, just as elders of the party led by a former Vice President and PDP presidential candidate in the 2019 election, Atiku Abubakar, pleading for all aggrieved party members to sheathe their swords as the party could not afford a crisis so close to the 2023 elections and with Nigerians yearning for a credible alternative to the faltering ruling party.

Observers note that this round of crisis has a direct correlation with positioning for the 2023 presidential election. Governor Nyesom Wike of Rivers State is thought to be eyeing the presidential ticket or the running mate of the party and a national party chair from the same South-South zone as he is and even from the same state, Rivers, as he is, may already have posed an impediment to that ambition, due to the office zoning policy of the party. There is the perception that he is intent on controlling the national convention delegates’ list and he is not sure that he could do that with Secondus at the helms. Secondus must, thus, give way. But there are others with similar ambitions who want Secondus to stay because it also suits their interests to have him as the party chair heading into the convention. Analysts believe that these are the forces in a head on collision with the Rivers governor’s camp.

Without naming him, Secondus has accused Wike, who happened to be his major backer in the run-up to his selection as the party boss, of being the brain behind the present crisis in the PDP. He said through his media aide, Ike Abonyi: “Who is after Secondus and why is somebody in love with playing the role of a caretaker?  Answers to the above posers will help members of the public to decipher the recent disquiet in the Peoples Democratic Party, PDP, and why few months to national convention of the party, somebody is routing for a Caretaker Committee to run the affairs of the party. “The media office of the national chairman is privy to an intelligence that the strong party chieftain bent on hijacking the party structure for destruction is still on the loose with the main agenda of denting the image of Prince Uche Secondus the National Chairman. Reports reaching this office shows clearly that this character is deploying all devious means to try and diminish the person and character of the National Chairman with a view to having his way of ultimately hijacking the structure for his disproportionately large ambition. We therefore wish to alert the general public particularly media houses and party stakeholders to look out for strange deployment of luring gifts from this destructive ‹Father Christmas› all aimed at having a grip on the soul of our party by having a caretaker committee. What continues to shock many party observers is the real reason behind the desperation of this man to get at the national chairman and the quantum of public funds being expended to achieve this illicit goal few months to the national convention.”

The current tussle is coming against the background of the efforts by both the Bala Mohammed Committee on the Review of the 2019 Elections and the Bukola Saraki-led National Reconciliation and Strategy Committee in repositioning the party ahead of the 2023 general elections. The Mohammed committee has since submitted its report recommending, among others, that the presidential ticket of the party should be thrown open to all regions. However, the PDP is yet to adopt the report, giving room for the present covert but intense internal struggle to get a head-start.

Governors elected under the party met over the crisis but were unable to reach a decisive resolution. They had to schedule another meeting to continue deliberations while assuring of their commitment to ending it. The committee set up by the PDP BoT last week has also started its work conscious of two things. One: Secondus’ term is ending in a few months. Two: the implications of a late change of guard before the national convention.  More party groups have since called on Secondus to step aside, including six members of the NWC and a faction of the House of Representatives PDP caucus. But he is adamant that there is nothing on ground to cause his resignation. His media aide, Abonyi, affirmed this much, when he informed that Prince Secondus is of the view that “nothing so far warrants his resignation from the party position and those tiny minority calling for his resignation should come clean and tell party members across the country his offense why he should resign.” The spokesperson added that the party boss will remain focused and committed to the ideals of the party, “which he swore to protect and defend upon his election to lead this great party 44 months ago.”

Observers are of the opinion that even without the benefit of power of incumbency, the main opposition party has the capacity to resolve the present quagmire falling back on its wealth of experience just as it has done numerous times in the past. But in trying to do this, some observers say it has little room for mistakes; members must avoid placing personal ambitions over party interest, given the propensity of the circling ruling party to swoop on its carcass.

The spellbinding stories of familial themes

Protest: Our agenda for UN General Assembly on Tuesday —Akintoye