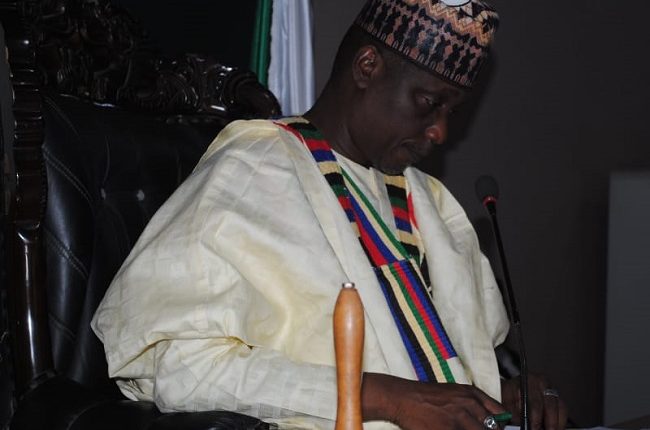 Bauchi Government has been advised to ensure that it fully paid the between 20 to 25 months salary of 5000 NTI/DLS
teachers in the employment of the state amounting to over N1 billion.

This was considered in the Report of the Bauchi State House of Assembly Committee on Public Petition and Human Rights on the disengagement and re-engagement of NTI/DLS teachers and payment of their 8-15 months outstanding salaries which was laid by the Acting Chairman of the Committee Bakoji Aliyu Bobbo representing Chiroma Constituency.

The Committee recommended that since there is condonation in between the disengagement and re-engagement of the teachers, the salaries of the re-engaged teachers must be fully paid.

In the Findings of the Committee, it was confirmed that the affected teachers were not given one month salary in lieu of notice before their disengagement and there were discrepancies of the re-engagement period of the disengaged teachers which was between 1-15 months.

The Committee also found that the outstanding salary of re-engaged teachers is more than N1 billion and the salaries of the 5000 NTI/DLS teachers have not been paid to SUBEB by the Ministry of Local Governments and Chieftaincy Affairs during their disengagement period.

There are teachers being owed between 20-35 months salaries as some of the teachers were re-engaged in June 2013 while others September 2013.

It also recommended that the State Government should constitute a high powered committee to revalidate the total never of teachers concerned and the House should direct the Government to ensure the speedy payment of salaries of the affected teachers after revalidation.

During its sitting, Majority Leader of the House, Tijjani Muhammad Aliyu representing Azare/Madangala Constituency moved a motion calling on the State Government to immortalize late Alhaji Ali Kwara for dedicating his life, wealth and all that it takes to ensure Bauchi State and Nigeria are safe.

Leading debate on the motion, Tijjani Aliyu described late Alhaji Ali Kwara as a rare gem who dedicated everything at his disposal not only in his home State Bauchi but the whole Nigeria and its neighbouring countries in curbing the menace of armed robbery, kidnapping, banditry etc.

He stated that “He spent the better part of his life and resources in ensuring that our people are safe from aggression of criminal elements in our society. It is a known fact that virtually every government in Bauchi State and most states in Nigeria engaged the services of the patriot Ali Kwara in maintaining the security of lives and property. He was one of the most reliable and trusted crime-busters of our time.”

Tijjani Isa Aliyu added that “He was an asset to Bauchi State and Nigeria as a whole because he has never failed in any assignment given to him. He has successfully assisted the relevant security agencies in capturing criminals and securing most of our forests and roads from the activities of armed robbers, kidnappers and bandits”.

“Late Ali Kwara dedicated his time and expertise in given a quality job for any construction work given to him in the State because he has written his name in gold.” The Majority Leader explained.

Contributing to the debate, Minority Leader, Bakoji Aliyu Bobbo Chiroma Constituency) said the motion is straight forward a f convincing thus it requires no much debate. He, therefore, moved that the motion should be adopted.

However, Musa Wakili Nakwada representing Bogoro Constituency observed that considering what Ali Kwara has done, there are greater places more than General Hospital Azare that can be named after him.

He said the contributions he gave were to the entire State and that hospital is serving the people of Azare, someone from Bogoro may not go there therefore suggested that “since we have State University, if it is named after him, it is not bad.”

Deputy Speaker, Danlami Ahmed Kawule representing Zungur/Galambi said that the motion moved by the Majority Leader was enough for the government to name any property it deemed fit after him and therefore seconded that the motion should be adopted.

The House unanimously adopted the motion with the amendments.

The Speaker, Abubakar Y Suleiman then announced the demise of Mallam Isyaku Magaji, a messenger attached to his office and said that after the House suspended the previous day’s plenary in his honour, the members and staff of the House paid condolence visit to the family of the deceased. A prayer was offered for the repose of the soul of Baba Isyaku.

Former Ekiti state governor, Mr Ayodele Fayose, has congratulated Edo State governor, Godwin Obaseki, on his victory during last Saturday’s governorship poll, calling on him not to return to the All Progressives Congress (APC).Pay teachers salaries

Obaseki who joined the Peoples Democratic Party (PDP) in June after he was disqualified by the APC, defeated Pastor Osagie Ize-Iyamu of the APC in the election results announced by the Independent National Electoral Commission (INEC) on Sunday.Pay teachers salaries Pay teachers salaries

A Kano based industrialist, Chief Kalu Ogbonnaya, has advised the Federal Government to take necessary steps to stimulate the nation’s economy to prevent a recession post COVID-19.Pay teachers salaries

Yellow fever cause of ‘strange’ deaths in Enugu, others ― Ehanire