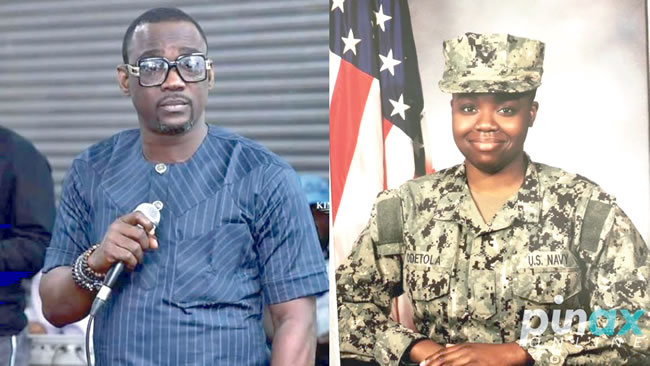 Happy times are here for Fuji music star, Wasiu Alabi, otherwise known as Pasuma as his  daughter, Opeyemi, on Wednesday got enlisted in the US Navy amid celebrations from friends  and family.

An elated Pasuma has never hidden his love for Opeyemi whose name is seldomly mentioned in his father’s songs, especially in a manner that suggests that he shares a special bond with his daughter.

Information pieced together by R revealed that Pasuma and Opeyemi’s mother could not hide their excitement at their daughter’s exploits in the US with plans already being made to give her what they describe as a “special celebration” party in Lagos and US.

Sharing the good news on his Instagram page, Pasuma described Opeyemi as one daughter who has continued to make him and her mother proud, saying he has never doubted her ability to excel in her chosen field.

Pasuma shared photograph of his daughter wearing the US Naval uniform with the message, “Congratulations to me, my girl is a Naval officer now in the US. Opeyemi La’merica, congrats, my dearest daughter. You always make me and your mum proud.”

BORDERLESS: Between Poverty Alleviation And Wealth Creation
Last Thursday, the World Bank stated that the number of the poor in Nigeria would increase by between 15 and 20 million over the next two years as a result of the COVID-19 pandemic. The World Bank country director in Nigeria, Shubhan Chaudhuri, who said this during the presentation of a report, Nigeria Development

POLITICAL ANALYSIS: Nigeria, The Drifting Ship
What has gone wrong with Nigeria? One of Nigeria’s greatest contributions to the literary world, the late Professor Chinua Achebe, endeavoured to provide an insightful answer to the teaser. In his classic 333-page book aptly entitled: There was a country, he wrote: “Most members of my generation, who were born before

‘Nigeria In Dire Need Of Restructuring And Ideological Rebirth’
We are very much like in a war situation even though we often shy away from admitting it. We live in denial on many issues and, as far as food production is concerned and being unable to feed the population, five factors are responsible. First, the weather has not been as favourable as required…

[FULL STORY] Outrage Greets Abduction Of Katsina Schoolboys
There was outrage across the country on Saturday as reports of the kidnap of an unspecified number of students of Government Science Secondary School, Kankara, Katsina State spread, bringing back memories of a similar incident in Chibok, Borno State in…

FLICKERS: For How Much Longer Can Nigeria Endure Buhari?
Two anecdotes, told by keynote speaker, Professor Adeolu Akande last week Wednesday, at a congregation of lawyers, drew the graph of the gripping state of the Nigerian union, in the most spellbinding manner. Two other narratives which strengthened his argument, came in the form of news stories which dominated the media during the same week. The first anecdote by Akande, Chairman of the Nigerian Communications Commission…

VOICE OF COURAGE: …ICC Light On Nigeria
THE festering evil in Nigeria has been going on as if it has the whole world under its feet and that no one would call it to question. Human life has become much worthless than those of cows under it and much consequences are at stake for toying with the life of those precious animals in this our  country…

Yoruba: Put On Your Thinking Cap
I found the piece published here today a compelling read. Titled “The Chinese and Fulani Only Need Patience with Yoruba over South-west Nigeria”, it was authored by my “egbon”, Dr. Babafemi A. Badejo. Please enjoy it! “On December 6, 2020, Aderinwa was on my mind as I played golf at the Sadique Baba Abubakar…