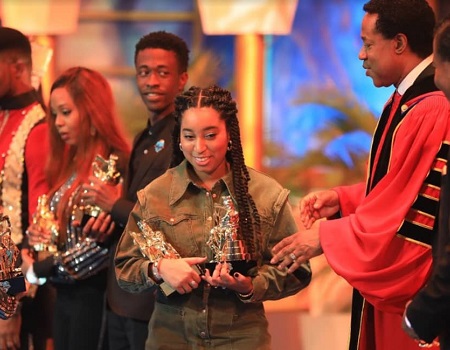 THE LoveWorld International Music and Arts Awards (LIMA) 2019 ceremony held in Lagos, on Sunday, has again established that the popular cleric and president of the LoveWorld Incorporated also known as Christ Embassy, Reverend (Dr) Chris Oyakhilome, who is the brain behind the initiative, remain a force to be reckoned with towards the growth of the gospel music industry in Nigeria.

The event, which is designed to recognise and reward music ministers produced by the church, featured a thrilling performance of gospel ministers including, Testimony Jaga, Joe Praize, Loveworld UK band, Sinach, Samsong and Eben, among others.

The highpoint of the event was the award presentation as Sinach won the ‘Song of the Year award’ with a mouthwatering cash prize of $100,000. The ‘Artiste of the Year was Testimony Jaga, who also got $25,000, while artistes such as Rita Soul, UK Band, and others also won cash prizes.

Speaking on the award, Testimony Jaga, who couldn’t hold back his joy, expressed his delight over the award in tears, adding that, “I appreciated the brains behind the awards and my fans. I bless God for how far He has brought me. God has brought me from nothing to a celebrity. I was on the street before I found salvation in Jesus Christ and comfort in the Loveworld home.”

Media Director of Loveworld Inc., Tony Ikeokwu said: “We believe that if you give people opportunities to express themselves, they will excel and because we feel we have limited opportunities available to our artists to be celebrated outside as gospel music ministers, so we instituted the LIMA awards to recognise and honour our own.”