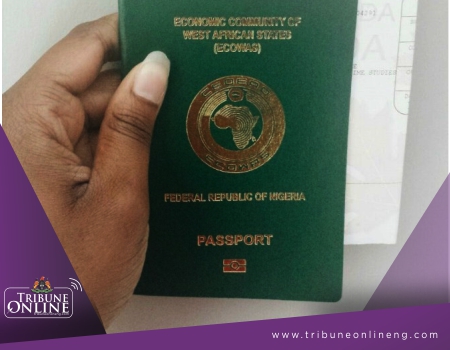 There are allegations of corruption, ineptitude and negligence by Nigerians abroad against the country’s officials in foreign missions, which they believe are unnecessarily causing a delay in the issuance and renewal of the Nigerian international passport.

They are thus calling on the Federal Government of Nigeria, through the relevant ministry, to look into matter, which is being made worse by the coronavirus pandemic, for proper redress. Of late, the footage of a distressed Nigerian lady, Oluwakemi Ola, lamenting her frustration at getting the Nigerian passport renewed at the Nigeria High Commission in Canada, has gone viral.

The lady, a resident of London Ontario, had gone to the Nigeria High Commission in Ottawa to renew her Nigerian passport, only to find out on arrival that the Commission did not open for business that day without a prior notice.

By implication, she would have to make a return trip for the same purpose which had cost her about $300, and which according to her, was much higher than what her father realises monthly back home in Nigeria.

Out of frustration, Ms Ola had said, “I am not Canadian yet, but the moment I become Canadian, I am burning this [Nigerian] passport. I will burn it and I will never, never in my life get a Nigerian passport.”

Another footage that has gone viral is that of an unnamed Nigerian of the Igbo extraction who had visited the Nigerian embassy in Bern, Switzerland, in relation to his effort at procuring a new Nigerian passport.

The man says he had to drive for two hours from his base in Schaffhausen to the Swiss capital after officials at the Nigerian embassy had failed to acknowledge all his correspondence. At the Nigerian embassy, the doors were locked with no one to attend to the man, despite his claim that some officials were within, going by the fact that the cars on the premises were neat, clean and uncovered by the falling snow.

“Nigerian government, bikonu [please], I use God to beg you, it’s better we close the embassy here because the embassy has no simple feeling about Nigerians in Switzerland. You would book an appoint at the embassy, call them, register for the passport. Calling embassy from Day One, nobody will pick your call. Write an email to the embassy, the embassy will never reply your email.”

Olalekan Osoleye’s case is similar. To get his passport renewed, Ohio-based Osoleye had to drive to Washington DC, which is six hours away.

“On getting there, I had a lot of nasty experience. They told me the embassy didn’t open for business and it was stated on the website that they were open for business that day. So that means I had to travel back home for another six hours. The website is not functional, no adequate information. You call them, nobody to pick the call. I wish the Nigerian government will do something about it urgently.”

Cecilia Edore is currently at her wits’ end over her hanging plans to visit Nigeria, as she says she has not heard from the Nigeria House in the UK, to which she has applied for passport renewal. She had submitted her documents in November 2020 and paid the required £90 fee for passport renewal, with her plan being to travel to Nigeria in January 2021. When it was obvious that the January date might not be feasible, Edore changed it to April, but till now she says she has not received any “information from the Nigeria House about passport renewal or alternative options.”

Calls put to the House, according to her, were not answered.

However, Sunday Tribune gathered on the website of the Nigeria High Commission that all Immigration and Consular Services at the High Commission would be suspended to the general public from December 22, 2020, until further notice. Part of the statement on the website reads: “This proactive measure is to protect and limit exposure of both applicants and staff of the Mission to the COVID-19 outbreak which is in line with the new Health advisory (Tier 4) issued by the UK Government.”

The High Commission, however, left some telephone numbers on its website, in case of emergencies, for immigration and consular services. Stories of allegations of corruption against Nigerian officials in foreign missions in matters of passport renewal also abound. When Omodolapo Akindele needed to renew her passport in December 2020, she engaged an official at the Nigeria Consulate in New York who promised to get the passport renewed for $400. The official price for passport renewal is $130, but she was ready to part with $400 having considered that going to New York from Indianapolis where she is resident would cost more. At any rate she still had to travel to New York for data capturing.

Eventually, the bubble burst and the deal collapsed when it was time for Akindele to collect her passport.

At this stage she said the man told him she had to come back to New York for data capturing again because there was a mix-up in the first one done. “When I discovered that he was trying to play some pranks on me, I told him he should refund my money or I will expose all his shady deals. I got my money back from him anyway. Now I have decided to do it myself by going online to fill the forms and obtain an interview appointment date,” Akindele said.

Babajide Olusola, a resident of Brooklyn, New York, recounts his story of frustration while trying to renew his passport in 2020.

He had applied online just before the coronavirus lockdown a year ago, but before the appointment date given him, the lockdown order had come into effect. A rescheduled appointment met with chaotic situation at the consulate. As a result, he had to repeat visit to the consulate about three times before he found favour from an unlikely person – a security guard – “who smuggled me into the waiting room.”

“I finally did my data capturing after waiting for over two hours having spent eight hours outside,” Olusola said. Adeolu Adeyemi, while speaking about the officials of the Nigerian embassy in Madrid, Spain, said: “They treat visitors to the embassy with laxity turning themselves into ‘tin gods’ as if they own everywhere. Their arrogance is an open display of their laziness and inefficiency combined.”

In Brazil, Nigerians’ problems are compounded by the closure of the country’s consulate in São Paulo, leaving only the embassy in the capital, Brasilia, to attend to all embassy and consular matters. The consular was operating until two years ago when it was shut down, owing to lack of funds, according to Otunba Kunle Aderonmu, a leader of the Nigerian community in São Paulo and president of the Africa Cultural Centre in São Paulo. Sunday Tribune understands that though the Nigerian embassy in Brasilia sends officials down to São Paulo to attend to Nigerians’ consular needs, including passport issues, at intervals, they would still love the federal government to reopen the consulate in São Paulo.

“If it is only a small office in São Paulo, it will be a relief. Thousands of Nigerians are suffering in an effort to address their individual consular problems,” Aderonmu, who has been living in Brazil since 1992, told Sunday Tribune.