Features
By Stephen Rutto and Gloria Aradi (standardmedia.co.ke) On Apr 20, 2019 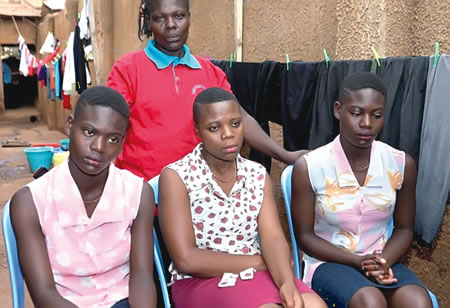 Richard Olukhakha and Rosemary Onyango, parents of Melon Lutenyo and Mevies Imbaya, whom they have raised separately, say their world was turned upside down upon discovering a teenager who looked exactly like one of their daughters.

Sharon Mathias, who has been raised by Angeline Omina, a resident of Kangemi in Nairobi, is a spitting image of Melon. The two believe they are twins.

Their meeting, which has excited Fafaro village in Likuyani Constituency, Kenya, comes 19 years after their mothers left Kakamega Provincial General Hospital, now Kakamega Teaching and Referral Hospital, with their babies – Rosemary with Melon and Mevies, and Angeline with Sharon.

But there are other similarities besides their being born in the same hospital and attending school in the same county.

“Their faces are so identical that I find it difficult to differentiate them. Their voices and way of reasoning are also similar,” says Rosemary, a retail shop owner at the Fafaro market.

She said she had also discovered the two share similarities in their personalities and love and dislike of certain foods.

“I was dumbfounded when I discovered that both of them don’t eat Omena (Lake Victoria sardine) and matumbo (tripe). I asked the new girl (Sharon) a simple question: Which food don’t you like? And she answered: “Omena and matumbo” – foods that my daughter Melon also doesn’t eat,” Rosemary says.

Melon and her other presumed twin sister Mevies travelled to Nairobi eight days ago to look for Sharon after they met and chatted on Facebook.

Rosemary said she also took time to speak to the teenagers about their relationships and got another shock.

“Both Melon and Sharon have close friends called Willis. I first thought they had a common friend until I asked to talk to the boys and I found out that the two boys are two different people,” the mother of ten said.

Melon and Mevies are the fourth born in the family.

When The Standard arrived at the home, a swelling crowd of villagers had gathered to have a glimpse of the identical girls.

The girls had accompanied Richard to the nearby Kitale town and the crowd was awaiting their return.

Richard said he took all the three girls to a local health facility to determine their blood groups and was surprised to learn they were all O Positive, just like him.

Rosemary says she wants the DNA test done as soon as possible to dispel anxiety among the girls and help the parents know the truth.

She said she had not been accompanied by any family member when she went to give birth to her children and maintains she had been told, during ante-natal clinic visits, that she was carrying triplets.

At her home in Kibarage slums within Kangemi, Nairobi, Angeline Omina looks sad and unsettled by the sudden turn of events.

“I love this child so much and I have worked hard to raise her. Even these odd jobs that I do, I do for her. If she asks me for something, I always struggle to give her,” Angeline told The Standard, fresh from her housekeeping job in Westlands.

She admits she is fearful about confronting the reality that Sharon may not be her daughter.

Angeline admits the possibility is high.

“The nurses just gave me the baby to glance over when she was born. They said she can’t stay out in the cold for long and they have to rush her to the nursery because she is premature”. That is all she remembers of those few exhausting moments after delivery.

Later, when she went to the nursery to see the baby tagged “Sharon Mathias”, the name she had given her daughter, she says she bore a resemblance to the baby she had birthed earlier.

Mevies, the other girl who has been raised as Melon’s twin sister, bears an uncanny resemblance to Angeline. Unlike Sharon and Melon, Melvin is shorter and lighter, much like Angeline.

“Even relatives have been saying she resembles me and that I may be her mother,” Angeline admits, also noting that people often questioned why Sharon, her daughter, did not resemble her.

She further reveals that the children are stressed too, noting that Sharon’s performance has dwindled since the matter began to unravel.

She says they all need to know the truth so they can be at peace.