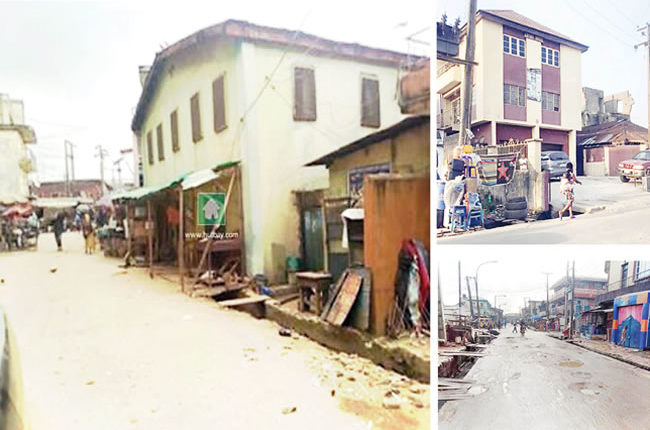 The 37km North-South rail project tagged the Lagos Rail Mass Transit (LRMT) Red Line is expected to cut through Ebute-Meta to Agbado in Ogun State, moving more than one million passengers on a daily trip. TOLA ADENUBI reports that with the impeding demolition of buildings just a month away, some affected property owners have started putting up their houses for sale, among other panicky decisions.

The first phase of the Lagos Rail Mass Transit (LRMT) popularly called the Red Line is expected to run through Oyingbo to Agbado in Ogun State, cutting through residential and office buildings in Mushin, Yaba, Ikeja and other densely-populated locations in Lagos State.

In a bid to reduce the impact of the demolition (which is just a month away) of structures along the right of way of the Red Line, the Lagos State Government through the Lagos Metropolitan Area Transport Authority (LAMATA), engaged two consulting firms, Nolasimbo Consulting Engineers and Partners Limited, and Global Impact Environmental Consulting Limited to identify Project Affected Persons (PAP).

While the two consulting firms are set to begin vetting process and payment of compensation to property owners in Ikeja area, the Mushin axis of the state is proving a bit difficult due to factors like identifying true property owners, third party arrangement for compensation negotiation and sale of properties by owners out of fear that the expected compensation might not match the value of property that would be demolished.

For families of some late property owners in Ogunmokun and Kayode streets, both in Mushin, the consultants engaged by the Lagos State government have allegedly been talking to wrong family representatives over compensation issues.

When the Nigerian Tribune visited Ogunmokun street in Mushin, one Mr. Tajudeen Balogun who claimed to be the son of a landlord on the street explained that the consultants have been talking to extended family members of the late Pa. Balogun, and not his children.

According to Tajudeen Balogun, “We, the children of the late Pa. Balogun Olasunmbo have not met with the Lagos State government consultants, although we heard that they have met with our uncles and siblings of our father. At our last meeting, we have agreed to go and meet them and explain the way things are in our family. We are the children and should be the ones discussing with the Lagos State government consultants, not our extended family members.

“The house located at Ogunmokun was built by our late father, so we the children should be the ones discussing with the Lagos State consultants, not our extended family members.”

Speaking with the Nigerian Tribune, an estate agent, Mr. Muyiwa Olasebiowo explained that many houses along Ogunmokun, Kayode, Oladipo Sode, Adigun and Okanlawon streets, all sitting on the right of way of the Lagos Red Line at Mushin were put up for sale by their owners towards the end of last year out of fear of not getting adequate compensation from the Lagos State government.

“Towards the end of last year, many houses were being put up for sale by the property owners around Kayode, Ogunmokun, Oladipo Sode, Adigun and Okanlawon streets in Mushin. Landlords were coming to me and some of my colleagues to help them sell their properties. We initially thought it was good business until we got wind of the plan by the Lagos State government to commence the construction of the rail line from Oyingbo to Agbado. It was after then that we realised why many of the landlords wanted to sell their properties. Many were afraid that the compensation that would be given to them by the Lagos State government might not be commensurate with the true value of their properties, and wanted to cash in on the affected houses.

“So, most of us turned down the offers of the landlords since the buildings were already earmarked for demolition. Why should I market a building that will soon be demolished by the Lagos State government? The property owners wanted to cash-in on the properties at good prices out of fear that the state government might not pay good money as compensation.

“When news filtered in that the state government will be paying both the landlord and the tenant, the fear of the property owners increased, and many desperately wanted to sell their properties. They feared that if government will be paying both the landlord and tenants compensation, monies paid to the tenants could be a percentage of what should have accrued to the landlords; and most property owners would not want this. Therefore, efforts to sell those houses intensified, but many failed because everybody already knew that those houses were sitting on the Red Line right of way and earmarked for demolition.

One of the representatives of the Lagos State project management team for the Red Line who speak on condition of anonymity with the Nigerian Tribune, stated that the landlords hiring attorneys to help them negotiate on behalf of their properties will only have themselves to blame at the end of the day because the state government would not pay more than what is deemed fit for any building, irrespective of whoever is representing who on the negotiation table.

“We are now enumerating the amount of properties that will be affected and the persons that will be affected. Ordinarily, we should just be talking to property owners, but the Lagos State governor, Babajide Sanwo-Olu, in his wisdom, asked us to talk to everybody affected, including tenants and landlords. If we talk to only the landlords, they might not cater to the needs of their tenants. That is why Mr. Governor asked us to also lend compensation to tenants so that such compensation will help them relocate easily.

“The demolition is expected to commence in a months’ time, and if we don’t extend compensation to the tenants, relocating might become tedious for them due to the short notice of time remaining for them to relocate.”

In Mushin, a public display to confirm the true identity of property owners and tenants had been put out by the Lagos State government in order to ensure that truly affected persons get compensation. Continuing, one of the representatives of the project team who spoke on condition of anonymity added that “we are now at the second stage, which is the public display. We have been going to the affected houses, taking their biometrics. However, the issue at Mushin now is that we don’t even know if those we met in those houses are actually the right people. These are the people we met in those houses in Mushin, however, if they are the right people, we cannot authoritatively say for now. To correct this anomaly, we have done a public display, and it is for people to go and check and confirm if the names we mentioned in those public displays are the names of the right people. If the names published are not those of the right property owners or tenants, they should call us. That is why our numbers are displayed publicly on the public display that we made.

“Mushin is not the only location that we are doing this. We have done a similar thing in Ikeja, and we are currently doing verification for property owners there. All we are waiting for in Ikeja is to complete the compensation calculation, and then we will call the property owners to come forward for notice of compensation.

“It is only in Mushin that I have met 10 different sets of people. We have met the landlords, the CDA leaders, community leaders and so many more. If anybody has issues with the public display that we have made, let them get in touch with us.”

On the quest to get higher compensation by the property owners through engagement of third party negotiators, the Red Line Project representative stated that some people had been going around, claiming to be Lagos State certified valuers and promising the property owners that they could help them negotiate for higher compensation value from the Lagos State government.

“We are yet to do verification, but we are already having issues there. We have heard of some people going about claiming to be appointed Lagos State valuers. These people are getting hired as attorneys by the property owners to help them negotiate higher compensation plan with the Lagos State government.

“So whoever is hiring attorneys should be ready to pay such third party negotiators through whatever the state government gives as compensation,” he warned.