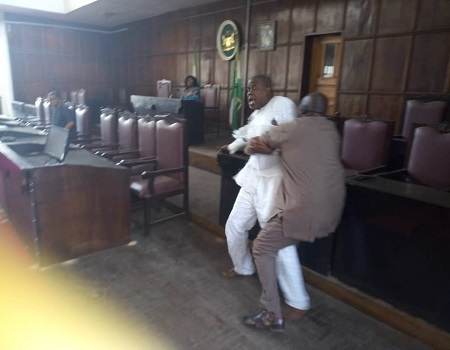 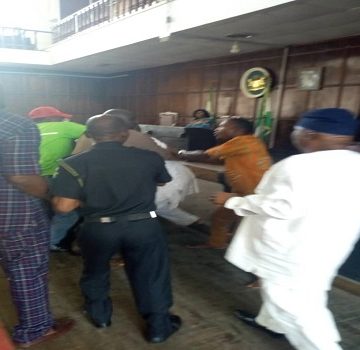 PANDEMONIUM broke out in the Ondo State House of Assembly as hoodlums suspected to be political thugs invaded the State Assembly complex over the removal of the Speaker and his deputy, Hon Bamidele Oleyelogun and Iroju Ogundeji respectively.
About 18 lawmakers who accused and signed the impeachment process of the impeached Speaker and his deputy accused the two officials of gross misconduct, incompetence, financial misappropriation, high handedness and enriching themselves through corrupt means, and called for their impeachment.

Trouble started when the Speaker arrived at the Chamber and ordered for the commencement of the proceedings but was faced with the impeachment process.

He, however, tried to stop the process but he was overpowered by the lawmakers who elected the former Speaker of the House, Rt  Hon Jumoke Akindele as the potential chairman to direct the affairs of the house.

ALSO READ: US midterms elections draw closer
Drama ensued when the embattled Speaker punched the female lawmaker who sprawled on the floor of the House, while they struggled with one another and tore their cloth to shred and took the intervention of the female staff of the House to cover the first female Speaker out of the gallery.

The 18 lawmakers were not however deterred as they carried on with the impeachment process and removed Oleyelogun and Ogundeji while they subsequently elected new officers.

Hon. Olumide George from Akure North constituency was elected as the Speaker while Hon Bimbo Fajolu from Ile Oluji/ Okeigbo was elected as his deputy.

Hoodlums suspected to be members of the National Union of Road Transport Workers (NURTW) led by its Chairman,  Jacob Adebo, however,  invaded the Assembly Complex with armed objects such as cutlass, canes, knives and stones.

The hoodlums who were misinformed about the lawmakers plan to impeach the state governor,  Rotimi Akeredolu, stormed the House, beating journalists,  officials of Directorate of Security Service (DSS) staff of the state at Assembly and some lawmakers were beaten blue-black while their vehicles were also destroyed.

Security operatives led by the state Commissioner of Police, Mr Gbenga Adeyanju and others security outfits were seen folding their arms and looking the other way while the hoodlums operated without any hindrance.

The new Deputy Speaker,  Fajolu, Former Speaker  Jumoke Akindele received a serious beating from the thugs while a journalist in the state, Abiodun Taiwo of AIT station was beaten to coma and rushed to a hospital where he was revived.

The hoodlums also destroyed a Lexus Jeep belonging to the new Speaker before he escaped from the complex.

Speaking with newsmen, the Chairman House Committee on information, Hon  Fatai Olotu said the impeachment of the Speaker was done in good faith and in the interstate of the state.

Olotu said: “the two-faced third of the members of the Ondo State House of Assembly today removed the Speaker and his deputy over their incompetence to run the affairs of the House.

“I want you to know that changing leadership is an inherent right of members of the House. The two officials have shown great incompetence in running the affairs of the House.

“They ran the House aground financially and committed a lot of financial impropriety that members can no longer condone.

“As at June this year, they have exhausted all the budgetary allocation for the house which runs to the tune of N1.5b without the knowledge of the House of Assembly.

He disclosed that the suspension of the two principal officers would not affect the relationship between the members of the House and the Executive.

The lawmakers however suspended four members of the House of state Assembly which included: the two impeached officer,  Oleyelogun and Ogundeji, with Abayomi Akinruntan and Suleiman Maito.

However, the impeached Speaker described the exercise of the members of the House as an effort in futility saying “I remain the Speaker of the Ondo State House of Assembly.”

He expressed optimism that the action of the 18 members of the House would be reversed saying, “I will be reinstated as the Speaker of this great House.”

Reject candidates’ list before you, not from us, Lagos Accord Party tells INEC