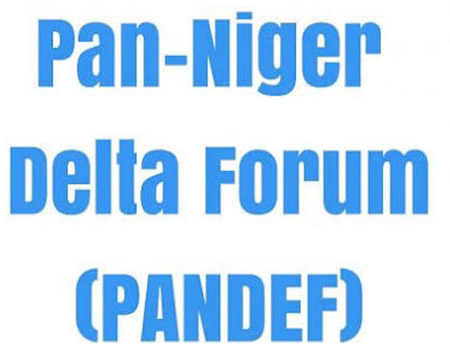 PANDEF, in a statement, signed by its National Publicity Secretary, Hon Ken Robinson, made available to our Correspondent, on Tuesday, also commended Buhari for responding, though belated, to the calls of well-meaning Nigerians by accepting the resignation of the erstwhile service chiefs.

“Though the sack of the erstwhile Service Chiefs was long overdue, we commend President for finally responding to calls by well-meaning Nigerians,” Robinson noted.

The South-South socio-cultural group also congratulated the newly-appointed Service Chiefs, urging them to eschew unprofessional tendencies in the discharge of their duties.

“We congratulate the new service chiefs while hoping that they would discharge their duties and responsibilities professionally, without biases and tendencies, in the best interest of the country.

“PANDEF, however, quizzes Mr President’s plaudits on the outgone Service Chiefs given their evident failure to deliver on their various mandates, amidst worsening state of insecurity in the country,” the PANDEF scribe affirmed.

One killed, many injured as police, Shi’ites clash in Abuja

IPOB to DSS: If Nnamdi Kanu is alive, allow his lawyers, family see him