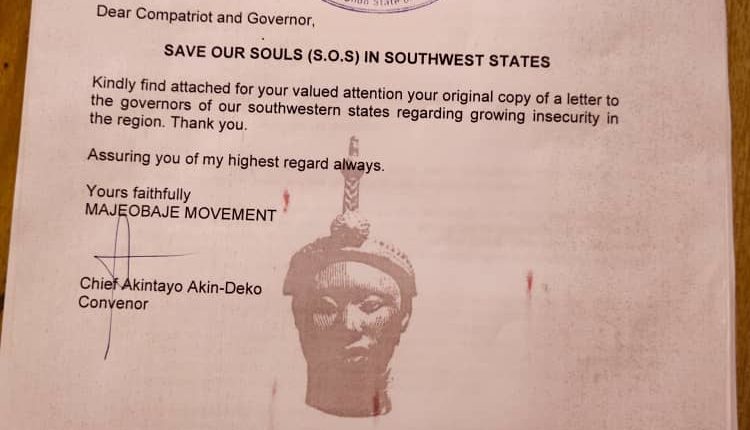 The governors of the South-West states have been accused of abdicating their primary constitutional duty of protecting the lives and properties of their citizens, judging by the escalating security crisis in the region.

A pan-Yoruba group, the Majeobaje Movement, leveled the allegation in a ‘save our souls’ letter to the Chairman of the South-West Governor’s Forum and Governor of Ondo State, Mr Rotimi Akeredolu, which was copied to the five other governors.

In the letter, the movement described itself an alliance of professionals, entrepreneurs, policy specialists and academics concerned about and working for improved governance in Nigeria.

The group decried the spate of killings, kidnappings, rape and sundry criminal activities ravaging the region under the governors’ watch, with the attendant loss of lives of citizens and the destruction of their livelihoods.

Majeobaje wondered why the much trumpeted South West Security Network, codenamed Amotekun, is yet to be effectively pressed into the service of protecting the lives and property of the citizens of the region, against the high expectations of the citizens.

It highlighted several unresolved security breaches in the region especially in different parts of Oyo, Ekiti, Osun, Ondo and Ogun states, which had caused anguish to many families.

The group said it is worrying that little or nothing had been done by the government of these states to mitigate the sufferings of residents in the hands of herdsmen, kidnappers, rapists and armed robbers or to bring the band of criminals to justice.

The group further stated: “Insecurity in the South-West has now reached a crisis point, partly because the Federal Government refuses to act decisively, and also because our governors are failing to use Amotekun effectively.

“Because banditry has overwhelmed the North-West, Fulani herdsmen are fleeing desertification, victims of Boko Haram in the North-East are seeking refuge, and the unemployed from all parts of Nigeria are looking for work, these people are now streaming mostly into South-West states.

“They often do so with a high level of aggression including bearing of AK-47 rifles with which our people are being raped and killed with scant regard to the sanctity of life, our culture or the rule of law.”

In a five-point recommendation, Majeobaje wants the governors to act decisively in stamping out criminal activities within the region and ensure that citizens sleep with both eyes closed, especially now that the end-of-the-year festivities have peaked.

1) That the six governors should urgently allocate more funds to Amotekun so the outfit can be fully equipped and recruit more personnel to improve its operations, especially by the deployment of surveillance drones and forest rangers. The ongoing assistance to conventional security agencies should be enhanced and sustained.

2) Use new and existing laws to revamp neighbourhood associations and to strengthen local government security committees to include traditional rulers, Amotekun/Police and Vigilantes. These two units will help document residents, deter criminals, and collate data to monitor the activities and welfare of itinerant workers such as Okada riders, farm workers, herders and others.

3) Encourage the setting up of private security companies that will specialise in intelligence gathering services as well as the imperative use of drones for aerial surveillance and the investigation of kidnappings.

4) Set up or reboot a security trust fund in each state in such a way that will encourage and compel the private sector to support with funding and management of these security initiatives.

5) Demonstrate leadership by physically leading the charge to secure your states, by mobilising resources at the front lines, and by rekindling the hopes of our farmers, their families and other residents to demonstrate that their governors have not abandoned them to the impunity of marauding forces.

The Majeobaje Movement cautioned that  Governor Akeredolu and other governors must urgently act so that the long suffering people of the six states are not left with no option than resort to self-help, the consequences of which can only be imagined for both leaders and the led.

The group said: “We, therefore, call on you and your colleagues to rise up today, take leadership and fulfill your primary purpose of protecting and defending the lives and properties of your people!

“If you fail to urgently do the needful by pushing back the marauders, we are concerned that our anxious people may regain their composure and be left with no other option than to defend themselves.”

Assuring the governors of their highest regard always, the letter, dated 12th December, 2020 was signed on behalf of its members by its steering committee members including Chief Akintayo Akin-Deko, Sir Gbenga Adebusuyi, Reverend Muyiwa Bamgbose and Mr Ibukun Fakeye.