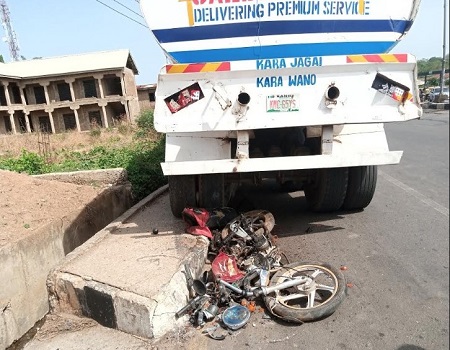 Eyewitnesses told Tribune Online that the first accident happened because the driver of the tanker with registration number KMC-65YS failed to maintain his lane due to the poor state of the road in the axis.

Consequent upon the death of the motorcyclist, a group of sympathisers began fomenting trouble in the area. The mob threatened to burn the diesel tanker involved, but for the intervention of the security agents.

The angry mob also started throwing stones at any trailer plying the axis. Tribune Online reports that that the driver of another truck who was scared by the angry mob throwing stones at the truck made a U-turn and it incidentally killed a commercial driver, simply referred to as Oganla, by residents of the area.

According to the sector commander of the Federal Safety Corps (FRSC) in Oyo State, Uche Chukwurah, who confirmed the deaths in Ibadan, “There was an accident where a trailer tanker knocked down and killed a commercial motorcyclist in Ogbomosho. The accident occurred because the trailer coming from Takie Square took one-way direction and, unfortunately, killed one Mr Dauda. Taking of one-way is a rule violation.

“I also learnt that after the first accident had claimed Dauda, another truck which was attacked by angry mob, who wanted to revenge the death of the victim, wanted to run for his life and incidentally killed another man.”

Chukwurah explained that the loss of lives would have been averted if the trailer had not taken one way. “We have been sensitising drivers to not take one way because of the inherent danger. More, today is Sunday and apart from that, there has been a stay-at-home directive by the government due to the coronavirus pandemic.”