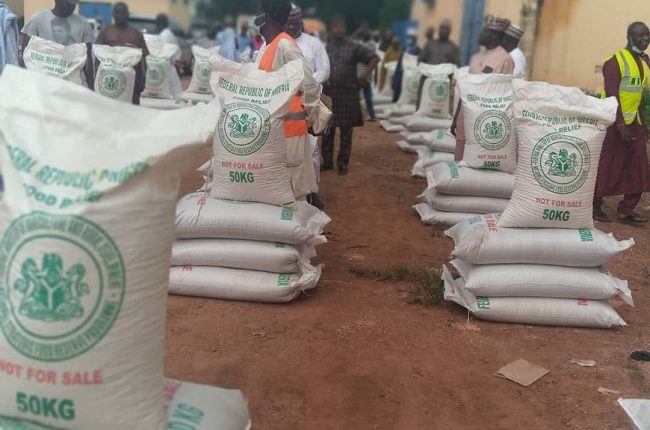 The Federal Government has begun the distribution of 3,659.7 metric tonnes of grains to 80,405 households in Sokoto State, as part of measures to cushion the effects of COVID-19.

AVM Muhammadu Muhammed, the Director-General, National Emergency Management Agency (NEMA), stated this at the presentation of the food items to the state government, on Tuesday in Sokoto.

Muhammed, represented by Dr Onimode Bandele, Director Relief of the Agency, said the Federal Government had provided assorted grains for distribution to vulnerable households in the state, to mitigate the effects of COVID-19 lockdown aimed at stemming the further spread of the pandemic.

He said: “We are presenting assorted grains from the National Food Reserve, approved by the President Muhammadu Buhari.

“The items are to serve as palliatives for distribution to vulnerable persons affected by the recent restriction of movement to curtail the spread of COVID-19 pandemic in the country.”

He noted that the food items were supplied in batches of 57; 59½ and six trailer loads respectively.

The NEMA D-G drew the attention of the state government to the 2020 Seasonal Rainfall Prediction and the Annual Flood Outlook.

“These documents have forecasted flood situation for different parts of the country.

“However, the remaining 397 LGAs fall within the low probable flood risks areas, unfortunately, the predicted flood has started to occur in many parts of the country,” he said.

Muhammad said it was imperative for the government to activate proactive plans and measures against the prediction as the season moves towards the peak.

He urged the state government to adopt necessary mitigative measures to address the probable flood risk areas in the state.

Also speaking, Gov. Aminu Tambuwal, commended the gesture, adding that it would go a long way to alleviate the sufferings of the people in the country.

Tambuwal represented by Saidu Umar, Secretary to the State Government, said the State Emergency Management Agency (SEMA) would ensure distribution of the food items to the beneficiaries in good time. (NAN)