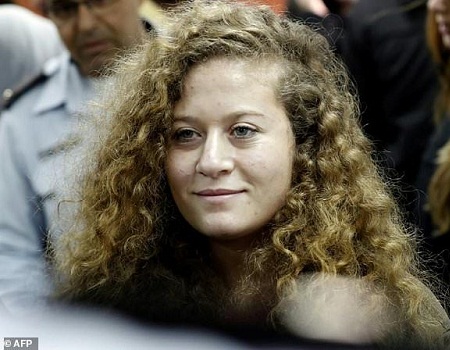 PALESTINIAN teenager Ahed Tamimi has been freed from an Israeli prison after serving an eight-month prison sentence for slapping a soldier, according to a spokesman for Israel’s Prison Authority.

Early Sunday morning, the two were taken from the HaSharon prison in central Israel to a West Bank border crossing, then on to their village of Nabi Saleh and released.

The young activist received a hero’s welcome upon returning home.

Video from Nabi Saleh showed dozens of her supporters waved Palestinian flags and cheered for Tamimi, who turned 17 in prison. As she walked through the crowd, many lined up to hug the teenager.

Flanked by her father and mother, Tamimi gave a short statement outside a home in her village, saying, “From our home, the resistance is continuing until the end of the occupation. I thank everyone who supported me during my arrest.”

Tamimi then left with her family to Ramallah, where she paid her respects at the grave of Palestinian leader Yasser Arafat, a family spokeswoman said.

While in Ramallah, she met with Palestinian Authority President Mahmoud Abbas at the presidential headquarters, according to official Palestinian news agency Wafa.

Abbas praised Tamimi, describing her as “a model of the Palestinian struggle for freedom, independence and statehood,” according to Wafa. Abbas also stressed the need for nonviolent resistance as an “ideal and vital weapon in facing the repression of the Israeli occupation.”

Following the visit, she returned to Nabi Saleh to address the media.

In a statement sent via text message to CNN, Tamimi’s lawyer, Gabi Lasky, an Israeli attorney who often represents Palestinian defendants, said: “After 8 months, it’s clear that Ahed’s arrest and punishment had more to do with politics rather than legal issues. Ahed’s trial heightened the folly of the occupation. Arrests of minors in the military court are not the right tool to end the Israeli-Palestinian conflict. I hope our leaders will be courageous enough to reach an agreement and free us all from the chains of occupation.”

Tamimi was arrested on December 19 after a video showed her slapping and kicking an Israeli soldier in Nabi Saleh. The video, shot by members of her family during weekly protests, shows the soldier pushing her away.

The incident, which happened on December 15, occurred shortly after a soldier gravely wounded her 15-year-old cousin nearby by shooting him in the head with a rubber bullet.

Her mother was arrested one day later on suspicion of incitement when she went to inquire about her daughter in jail.

At the time, Israeli Defense Minister Avigdor Liberman said: “Whoever goes wild during the day, will be arrested at night. Not only the girls and the parents but others around will not escape punishment.” Israeli officials have not commented since her release.

Doctor, nurse arrested over abortion that led to death