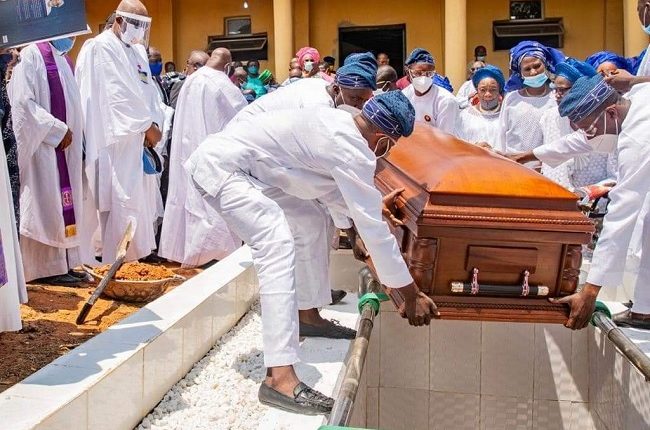 Eminent Nigerians on Tuesday paid tributes to one of the leaders of the Yoruba socio-cultural group, Afenifere, late Pa Ayo Fasanmi, as his remains were interred in his country home in Iye Ekiti, Ilejemeje Local Government Area of Ekiti.

Fasanmi, a Second Republic Senator, died on July 29 at the age of 94.

The News Agency of Nigeria (NAN) reports that the casket conveying Fasanmi’s corpse was brought to the community in a white jeep for the funeral service held at Saint John’s Anglican Church, Iye Ekiti.

Fayemi said Fasanmi’s contributions to the development of democracy was immeasurable, particularly his role in the formation and operation of the defunct National Democratic Coalition (NADECO) that fought the military.

The governor disclosed that his government was already constructing a secondary school to honour the deceased for his contributions to the state before his death.

“My only regret is that he has left us before the school will be officially inaugurated for academic activities when schools finally reopen,” Fayemi said.

Fayemi, in his tribute entitled, “‘Tribute to a Man of Integrity,” said what attracted him to the deceased was his integrity.

“His death has, therefore, robbed me of a godfather, counsellor, an advocate and a father. A good man has left us.

“We will sorely miss him but we are consoled that he was dedicated to selfless service,” he said.

Fayemi added that Fasanmi belonged in the class of the youths of the 1950s when the nationalist movement was at its feverish peak.

He noted that the deceased got indoctrinated into nationalism struggle through the writings of Dr Nnamdi Azikwe and his contemporaries.

“He proved his political mettle in 1964 when he was elected as a member of the Federal House of Representatives before 1966 and he got imprisoned in Agodi Prison and was later released.

“He offered to serve as governor of the old Ondo State in 1978 and slugged it out with Chief Michael Adekunle Ajasin who defeated him in the primary.

“One legacy for which Baba would be fondly remembered was his credential of incorruptibility. He was a man of tall integrity and honesty.

“It would be recalled that he was the first to start the Anti-Bribery and Corruption Committee in 1973 under Col. Oluwole Rotimi of the Western Region.

“Chief Ayo Fasanmi has come, he has seen and conquered. He conquered human cravings, vanity of power, ostentation, greed and malice,” he said.

Speaking on behalf of the Southwest governors, Gov. Rotimi Akeredolu of Ondo State, said the news of the passage of the icon was a loss to the Yoruba and Nigeria at large.

“He was not petty but he spoke the truth, lived a remarkable life and was one politician who became a senator and came home to rest,” he said.

Tinubu described Fasanmi as a revolutionary and a politician of outstanding mien, civility and character who was worthy of being emulated.

In his sermon, the Bishop of Ekiti Oke, Anglican Communion, Peter Olubowale, said Fasanmi was not a noisemaker and trouble maker during his time.

The cleric urged the people to continually do good to humanity the way Fasanmi did to his family, political associates, friends and companions.

“We need to be available to ourselves and committed to God. Nigerians are number one people in the world that are easy to govern with patience, zeal and endurance.

“Baba has told us that all these monies you are spending and the one you are keeping inside bullion vans and the ones being stashed in banks accounts are all vanity.

“Use the position you are occupying very well to develop humanity. This is the only way you can gain eternity because materialism will lead you to hellfire,” he said. (NAN)

Disclose the lands we acquired in your domain, El-Rufai tells traditional rulers